When Alison Levine was offered the chance to lead the first American Women’s Everest Expedition, she saw a lot of obstacles in front of her.

But after months of securing funding, a team, training, and making her way up and down Mount Everest (as is protocol to reach the summit), she found herself mere hundreds of feet away from the highest peak on earth.

That’s when she was told to turn back. Speaking to attendees at the CUNA Governmental Affairs Conference Sunday, Levine says having to turn back from her dream was just one of many lessons the expedition taught her.

She described learning how to build a team from one of the best to ever do it, Duke University men’s basketball coach Mike Krzyzewski (who wrote the introduction to her book).

But it wasn’t until nearly eight years later, in memory of a friend that passed away, that Levine found herself back on Mount Everest, once again a few hundred feet from the summit as a storm approached. 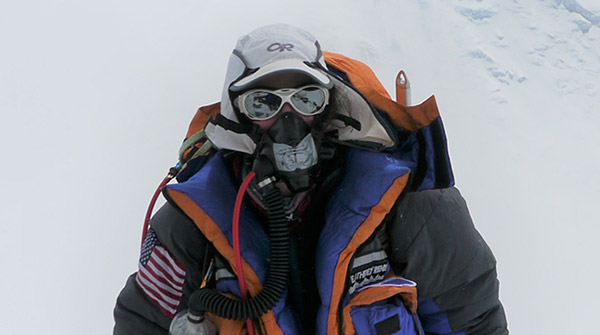 After reaching the summit on May 24, 2010, she became one of just a handful of people in the world to complete the Adventure Grand Slam, which consists of climbing the highest peaks on seven continents, and skiing to the North and South Pole.

And while she says she was proud, and the photo of her at the top of the summit was eventually featured on the front page of The New York Times sports section, Levine says the lessons she learned run much deeper.

“You’re only up there for a few minutes. Standing up there on top of a pile of rock and ice doesn’t change you, it doesn’t change the world. You know what changes the world? Raising kind, compassionate kids who will contribute to their community, being a good parent, being a good daughter, son, aunt, uncle, godparent, friend. Treating the people around you well and making sure everyone on your team knows how important you are to them and that you care about them,” she says.

“When people know you care about them, that’s what builds trust and loyalty, and I think that’s the kind of stuff that changes the world.”

She says the only reason she was able to achieve her goal is because she had tasted failure and learned from it, a lesson she said society at large could learn from.

“Because of that previous failure, I knew a heck of a lot more about my pain threshold, my risk tolerance, what it felt like to get the living snot kicked out of me high up on that summit ridge in the storm,” Levine says. “In general, we’re not a very failure-tolerant society, which is really too bad, because a lack of failure tolerance really stifles progress, innovation, and prevents people from taking risks.”

From a credit union perspective, Levine says businesses should embrace that adventurous spirit and learn from failures to get it right next time.

“When you’re going to try really hard things and set ridiculously high goals to push yourself far outside your comfort zone and really truly embrace the spirit of innovation, you’re going to have to give yourselves and your team some freedom to fail,” she says. “You just need to come back that much stronger the next time around.

"You never know who will be following your footsteps down the road who will benefit from that experience and be able to achieve really great things, even if you didn’t have the outcome you didn’t want at the time.”

►Read more conference coverage from CUNA News, and get live updates on Twitter via @CUNA_News, @cumagazine, @CUNA, and by using the #CUNAGAC hashtag. You can also follow the conference on Facebook and Instagram. For a complete schedule and information on keynote speakers and breakout sessions, visit the CUNA GAC event page.