As I wrote last week, the Congressional Budget Office (CBO) expects government debt held by the public to grow from $20.2 trillion in 2018 to $21.3 trillion this year, then jump nearly 50% to $31 trillion over the next 10 years.

While no significant issues currently exist with the nation’s ability to finance the debt or with the appetite for Treasuries on the part of investors, you’re not alone if you’re wondering what would happen if the economy slides into recession.

With deficits and debt growing so quickly, fiscal policy response options will be more limited and the federal government’s ability to use automatic stabilizers might also be imperiled.

Beyond this, some suggest growing debt levels might increase market interest rates, which in turn could reduce access to private investment. Certainly, the nation’s ability to effectively fight a war or to quickly respond to a big natural disaster could be hampered.

Economics is all about choice. Individuals, companies, and governments make choices about what goods and services to purchase and produce, and what needs and wants to satisfy.

Choices, of course, involve trade-offs. Wants and desires are unlimited, but resources are limited.

In dollar terms, mandatory outlays will increase by roughly two-thirds over the next decade: 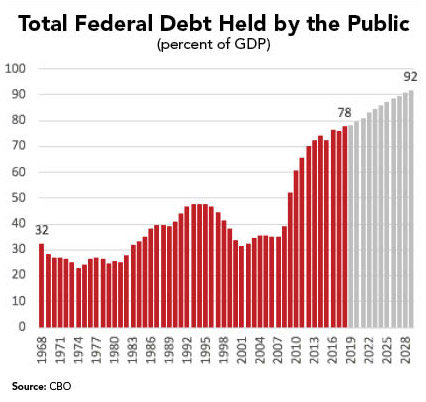 In contrast, discretionary spending will increase much more slowly, by less than 13% over the next decade.

Going forward, the country will be forced to limit spending on infrastructure, basic scientific and medical research, education and training, veterans benefits, agriculture, community and regional development, and many other programs widely viewed as critical to a dynamic, responsive, world-leading economy.

‘Small changes today can have big and less painful impacts in the future.’

At some point, policymakers will be forced to address this situation. But the longer they put off decisions the more limited and difficult their choices become.

Small changes today can have big and less painful impacts in the future.

At the moment, getting deficits (and overall debt obligations) under control will require reduced spending and/or increased revenues to bring deficits back from the nearly -5% of GDP to a sustainable -2% of GDP or thereabouts.

Deficits of -2% of GDP or less are consistent with stable and/or declining levels of debt.

That 3% reduction translates to approximately 13% of overall spending. Coincidentally, that’s nearly equal to the total amount of nondefense discretionary spending annually, and is also roughly equal to all defense spending. 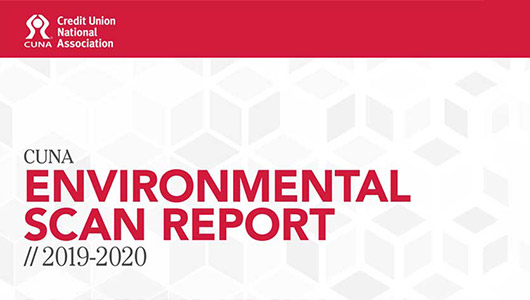 Learn more about economic uncertainty in the 2019-2020 CUNA Environmental Scan.

In the past, tax increases also would have been an obvious policy option. But today?

Changes to Social Security and major medical programs will almost certainly need to be made. The administration’s recent evaluation of these programs finds Social Security will exceed its income in 2020 for the first time since 1982.

The program’s reserve fund is projected to be depleted by 2035, at which time recipients will get smaller payments than they are scheduled to receive if Congress does not act.

Meanwhile, Medicare’s hospital insurance fund is expected to be depleted in 2026. At that point, health-care providers won’t receive their full compensation from the program and patients could be saddled with a bigger financial burden.

Obviously, these are big, complicated, and important issues for all Americans. The wrong choices will mean lower standards of living and slower economic growth.

Can policymakers get together for meaningful reform?