‘You didn’t just have a job, you had a career that you felt passionate about.’

Sarah Perkins majored in English as an undergraduate at the University of Maine in Orono.

That’s not a typical field of study for a career in financial services, but Perkins seems to have been destined for credit union success. 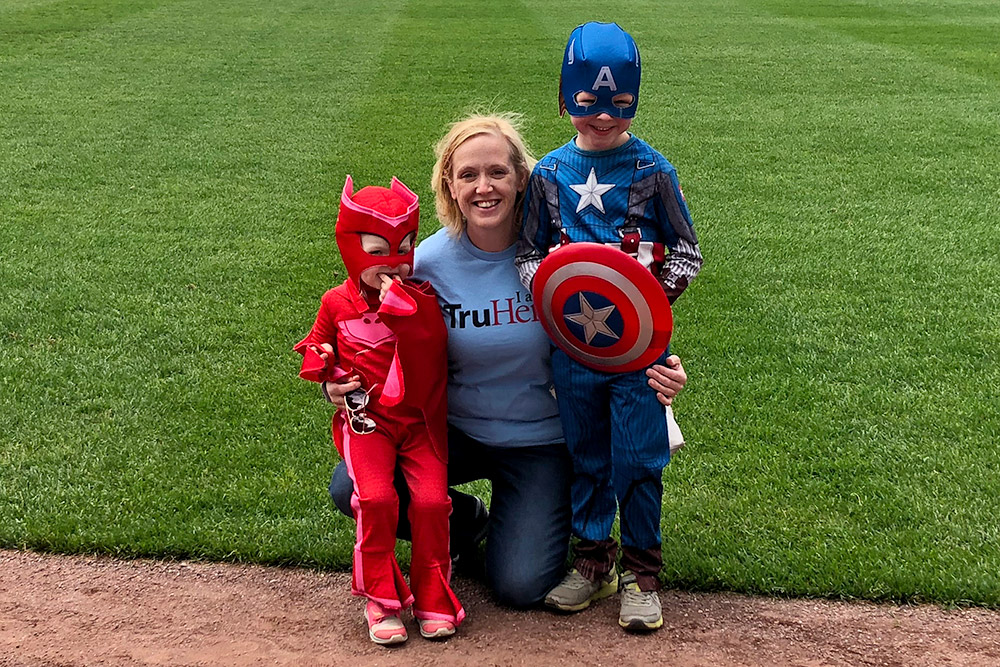 Click to enlarge. Sarah Perkins has passed along the family-oriented philosophy of her childhood to her two “superhero” children, Gwen, left, and Owen.

Her father is Bert Beaulieu, who was recognized in 2016 with a CUNA Compliance Award as vice president of compliance of Downeast Credit Union in Baileyville, Maine. He also was CEO of Portland (Maine) Regional Federal Credit Union.

“My dad loved working for credit unions,” says Perkins, who serves as executive vice president and chief operating officer at $139 million asset TruChoice Federal Credit Union in Portland. “Between him and my mom, who worked in the medical field, it was a very purpose-driven household. You didn’t just have a job, you had a career that you felt passionate about.”

Perkins started working for University Credit Union in Orono in college, and has taken on that purpose-driven philosophy. “What’s the saying? ‘Doing well by doing good?’” she says. “I find it very satisfying to have a positive impact on people’s lives, whether it’s our members, people in our community, or our employees. I love being part of something bigger.”

Perkins joined the “TruCrew” as vice president of operations in 2009 and has stewarded loan and deposit operations, information technology, and human resources in her rise through the organization.

“I was delighted to recognize her professional growth and the contributions she makes every day to the success of TruChoice,” says TruChoice President/CEO Ken Acker. “She has been working at a much higher level than was expected when her position was originally created, and I value her expertise and leadership.”

Acker had enough faith in Perkins to put her in charge of TruChoice’s core conversion. Virtually anyone who’s gone through a conversion cringes at the thought of it. Perkins enjoyed it.

“It was definitely a huge challenge, but it was exciting to see people come together and what we could bring to our members with the change,” she says.
Despite her ambition, Perkins says she doesn’t have grand career plans.

“It sounds cliché, but as long as I can keep bringing people together and providing value, I’ll show up all day, every day. That’s what makes this so enjoyable. I don’t care about my title. It’s just a vehicle to help me get stuff done.”