Subprime mortgages and the financial crisis

Run-up to the crisis

Using Home Mortgage Disclosure Act (HMDA) data to identify subprime mortgages—those with interest rates more than three percentage points above the Treasury yield for a comparable maturity at the time of origination—we find that in 2006, immediately before the financial crisis: 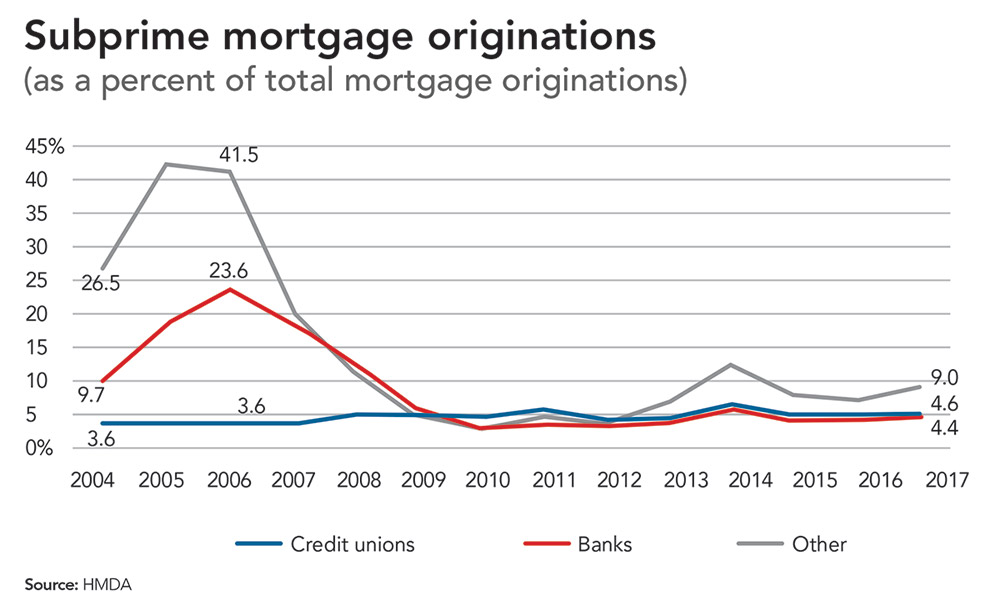 At nondepository financial institutions, such as mortgage origination companies, an incredible 41.5% of all originated mortgages were subprime, up from 26.5% in 2004.

At credit unions, only 3.6% of originated mortgages could be classified as subprime in 2006—the same figure as in 2004.

This is an incredible statistic because it indicates that while banks and mortgage companies significantly increased their sub-prime lending in the run-up to the financial crisis—likely in search of short-term profits and bonuses—credit unions didn’t increase their subprime lending at all.

What were some of the consequences of these disparate actions?

But if we look at the performance of depository institutions during the peak of the financial crisis, we see that delinquency and charge-off ratios spiked at banks to 5.6% and 2.6%, respectively, in 2009 versus only 1.82% and 1.21% at credit unions.

The difference in mortgage performance is even more stark. Among mortgages that remained on the books, 7.25% of mortgages originated at banks were delinquent in 2009 (versus only 1.97% at credit unions), and 3.95% of all bank mortgages were charged off (versus only 0.55% of credit union mortgages).

That’s despite the fact that in 2007, 58.4% of bank mortgages were sold to the secondary market versus only 20.6% of credit union mortgages.