Home » The power of teamwork
Leadership

The power of teamwork

Lola Johnson Shoesmith joined the Air Force as a way to pay for her college education.

But her four years at Little Rock Air Force Base left her with much more than a formal education. She left with the knowledge, skills, and sense of team that have proven to be valuable in her credit union career. 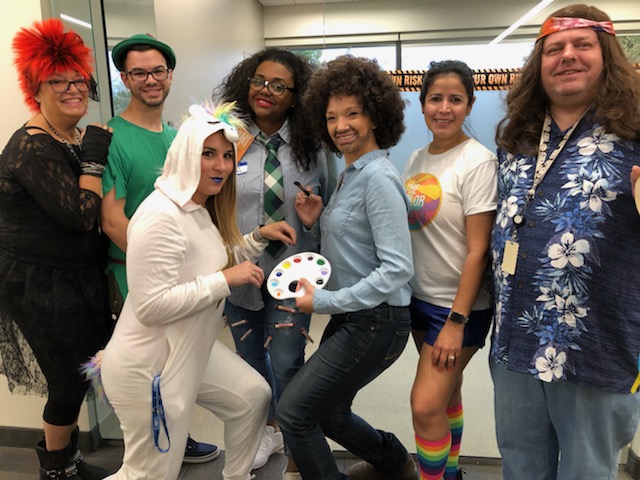 Click to enlarge. Lola Johnson Shoesmith, fourth from left, uses the lessons she learned in the Air Force to lead the inbound and outbound call center remote support team at Hanscom Federal Credit Union. The team recently dressed up and celebrated Johnson Shoesmith’s 15th anniversary at the credit union.

“There are ranks in the military, but you could have a colonel doing the same work as us if we needed him to,” says Johnson Shoesmith, the remote support manager at $1.4 billion asset Hanscom Federal Credit Union at Hanscom Air Force Base in Massachusetts. “We’re all working for the same team and we all have the same mission. If we work together, we can make it happen.”

A “military brat,” Johnson Shoesmith’s parents were in the Air Force, and it influenced her decision to join the service.

While stationed at Little Rock Air Force Base, Johnson Shoesmith worked on airfield management, which involved flight plans, security checks of the airfields, and responding to emergencies.

“I learned you need to depend on your team,” says Johnson Shoesmith, who achieved the rank of senior airman. “It’s not just one person doing it all.”

‘We’re all working for the same team and we all have the same mission.’
Lola Johnson Shoesmith

After leaving the Air Force, Johnson Shoesmith found the credit union industry to be a good fit. She joined Hanscom Federal as a call center representative in 2004. She now oversees the 15-person inbound and outbound call center remote support team, which assists members.

Her military background prepared her for her role at Hanscom Federal and she sees the habits she developed in Little Rock playing out on a daily basis.

“I lead by example in the sense of what we need to get done to get the mission done,” she says. “If I need to help [my team] and step out of my role, I do. That’s the way it was in the military.”