Navy Federal’s Brian Parker found meaning in his service with the Army.

A phone call from a U.S. Army recruiter gave Brian Parker the nudge he needed toward a purpose-driven life.

“When I left high school, I didn’t have a lot of direction,” says Parker, the assistant vice president of corporate communications at $106 billion asset Navy Federal Credit Union in Vienna, Va. “I was struggling with what I wanted to do and I wanted to find my mission.” 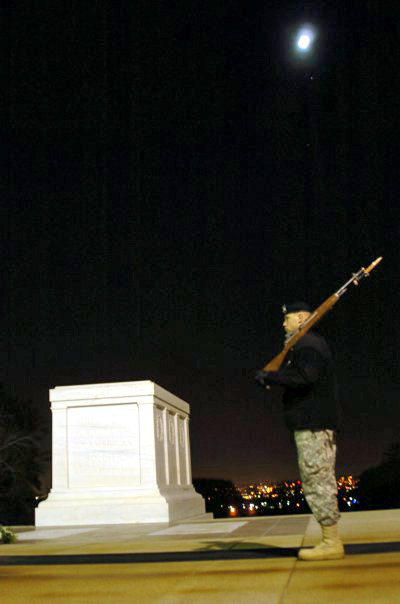 Click to enlarge. While stationed with The Old Guard, Brian Parker guards the Tomb of the Unknowns during a night shift.

Parker enlisted in the U.S. Army in 2005. A public affairs specialist, he was doing media operations and photo journalism with the 3rd U.S. Infantry Regiment, known as “The Old Guard.” The oldest active infantry regiment, The Old Guard also escorts the president and does burial operations in Arlington National Cemetery and the Tomb of the Unknowns. He spent time at Fort Polk, Fort Meade, and Fort Jackson during active duty.

While Parker, who achieved the rank of sergeant (E-5), joined the Army as military campaigns were ramping up in Iraq and Afghanistan, he says it was the right choice for him.

“It had a lot of purpose to it,” says Parker, who was never deployed overseas. “It was giving me meaning in my life and made me feel like I was part of something bigger than myself.”

That purpose to a mission is one that he experiences at Navy Federal.

“The biggest thing is having a sense of purpose or mission. Our motto is our members are the mission,” Parker says. “It’s really important to find what drives you. Not only Navy Federal, but the credit union industry at large really embodies that spirit of serving their members. It’s all about the members and I think that’s really important.”

In addition to the recognizing the importance of having a purpose, Parker says his time in the Army taught him invaluable leadership skills that translate well to his position at Navy Federal. It also gave him a sense of camaraderie.

“You’re always looking out for your brothers and sisters to your right and left,” he says. “You have that kinship with your fellow soldiers, Marines, or sailors, and that’s really hard to replace.”