Sandia Laboratory Federal Credit Union in Albuquerque, N.M., earned an Excellence Award for its “Recovering by Leading at the Speed of Trust” program.

“These were all tools we had,” Jones says. “But we had to put them all together and use them in a focused way to rebuild trust and confidence in our organization, which has led us to where we are now.”

‘We include DEI in every decision we make.’
Silvia Dimma

The $5.5 billion asset credit union has identified DEI as one of its core values and has incorporated these efforts into all areas of the credit union, including attracting and retaining a diverse workforce.

The credit union also established a diversity council. The 13 members of the council share their perspectives on how to move DEI efforts forward and encourage innovative actions that enrich the credit union’s environment and employees, Dimma says.

“We include DEI in every decision we make, and that contributes to a lot of things as we grow,” Dimma says. 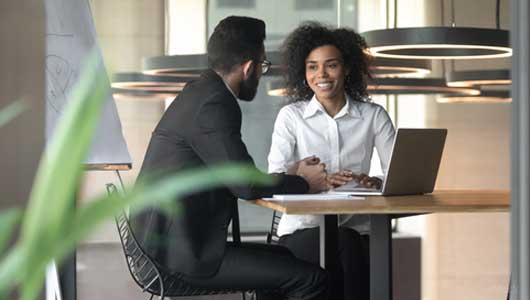 Adventure Credit Union in Grand Rapids, Mich., received an Excellence Award for its “Adventure Gives” program, which provides structure and more intention to the $397 million asset credit union’s involvement in the local community.

The program allows employees to get involved in identifying community groups to support. Each quarter the credit union holds a “wish list drive” to collect items organizations need on an ongoing basis. Employees are also encouraged to volunteer for selected events that take place during the workday.

Since it was established in 2018, Adventure Credit Union has raised and donated $15,000 for organizations, employees have logged 1,000 volunteer hours, and the credit union has donated $25,000 for event sponsorships, says Megan Anthony, director of human resources.

The biggest benefits from these efforts have been “stronger relationships with our members because they want to know more and ask how they can be involved, and increased employee morale because employees from different departments are working together and forming a stronger team,” Anthony says.