ICYMI: Highlights from the 2021 CUNA GAC

More than 3,000 credit union advocates gathered virtually for the 2021 CUNA Governmental Affairs Conference (GAC), accessing 113 sessions addressing everything from the need for “less attacking and more listening” in the political arena to the importance of well-being in credit union advocacy efforts.

In case you missed our coverage, here are some conference highlights from CUNA News, sponsored by Podium:

► CUNA President/CEO Jim Nussle explains why financial well-being for all is how the credit union difference becomes tangible for members.

► Soledad O’Brien—an award-winning journalist, author, and documentarian—says credit unions promote a “sense of belonging” in the communities they serve.

► “Katalyst” Kevin Carroll urges leaders to “bring opportunity, possibility, and resilience to every situation,” and offers several lessons from his eclectic career.

► H.R. McMaster, former U.S. national security adviser and a retired lieutenant general for the U.S. Army, says credit unions can be a “fulcrum for positive change” in their communities. 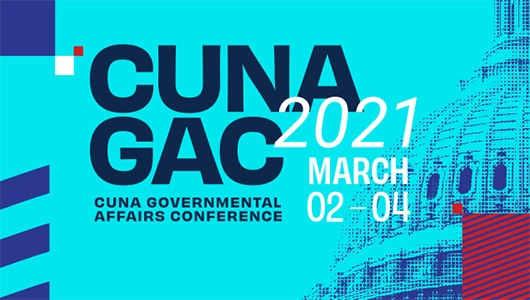 ► House Speaker Nancy Pelosi, D-Calif., thanked CUNA, the California Credit Union League, and credit unions for the work they do in a video address to the conference. She was one of several legislators who offered positive messages to credit union leaders following addresses from Senate Majority Leader Chuck Schumer, D-.N.Y., and others.