The state of auto lending

While supply chain struggles and online competitors stalled new- and used-auto lending in 2021, conditions are right for a rebound.

The COVID-19 pandemic has exacerbated the slowing trend the industry began to see at the end of the 2010s.

1. Demand for credit decreased when more than 20 million people lost their jobs, uncertainty about the economy increased, and overall consumer spending declined sharply.

2. The supply of new vehicles to the market lagged the increasing demand after the U.S. weathered concerns of an extended recession.

Plant closures and a shortage of semiconductor chips due to global supply chain bottlenecks exacerbated the problem.

The Federal Reserve lowered its target range for the federal fund rate to support the economy in March 2020. This brought down the cost of borrowing for various loan types.

Credit unions’ average interest rate for new- and used-vehicle loans decreased a respective 70 basis points (bp) and 86 bp in 2020. New- and used-auto loan rates fell another 30 bp and 22 bp, respectively, during the second quarter of 2021.

In September, the Federal Reserve announced it will start to taper off its asset purchase program by year’s end with a possible rate hike in 2022.

The supply of new vehicles lagged the increasing demand after the U.S. weathered concerns of extended recession.

Increasing vaccination rates, reopening the economy, and improving consumer spending led to a strong economic recovery in 2021. By June, the annualized quarterly growth data showed the economy exceeded its pre-pandemic level of output.

However, while demand for new cars grows as the economy recovers, supply isn’t catching up. The global shortage of semiconductor chips resulted in one of the lowest inventory levels ever for new vehicles at U.S. dealerships. 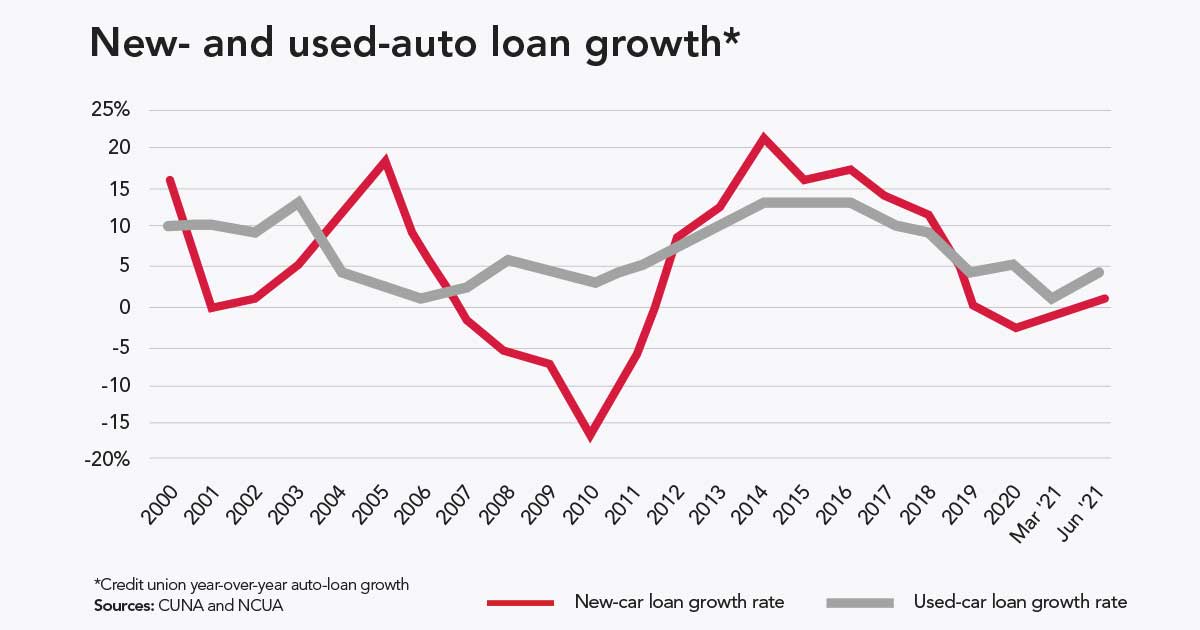 The ratio of auto inventory to sales—0.7 in July 2021—is at its lowest point since data on this metric became available in 1993. This implies that dealerships’ ability to restock cars is slower than sales. As a result, current inventory is down 70% relative to pre-pandemic levels.

The rise of the delta variant in East Asian countries, which control about 90% of the semiconductor chip market, worsened the situation by leading to plant and port closures.

Auto companies such as Ford and General Motors have cut production and reported factory downtimes due to the shortage, while several U.S. vehicle assembly plants have remained idle for weeks.

The National Automobile Dealers Association announced that sales for the rest of the year will likely be limited by continued inventory constraints.

As a result, the global auto industry is projected to lose $210 billion in 2021, according to the global consulting firm AlixPartners.

IHS Markit predicts U.S. vehicle assemblies will fully recover from the ongoing computer chip shortage sometime in 2022 once supply catches up with demand.

This will dampen credit union auto-loan financing in 2021 due to lower vehicle supply.

On the other hand, the shortage of new vehicles increased demand for used cars, which led to unprecedented price increases in 2021. The Manheim Used Car Value Index shows prices continually increased every month from January until May.

A comparison to previous year prices reveals the margins were as high as 50%. The increasing prices eventually started to come down, but used cars, on average, were still valued 25% higher than a year ago as of September.