Internal launch of awareness effort strengthens ties with both consumers and staff.

Each day, thousands of people around Northern Virginia see Marella Nardotti’s smiling face as she makes the rounds on an inter-county commuter bus.

It’s part of NextMark Credit Union’s efforts to raise awareness of its new brand and consideration of credit unions overall.

“We hadn’t done any transit advertising before, and I thought it would be fun and engaging to combine our brand introduction with the Open Your Eyes to a Credit Union® campaign,” says Nardotti, vice president of marketing at the $507 million asset credit union. 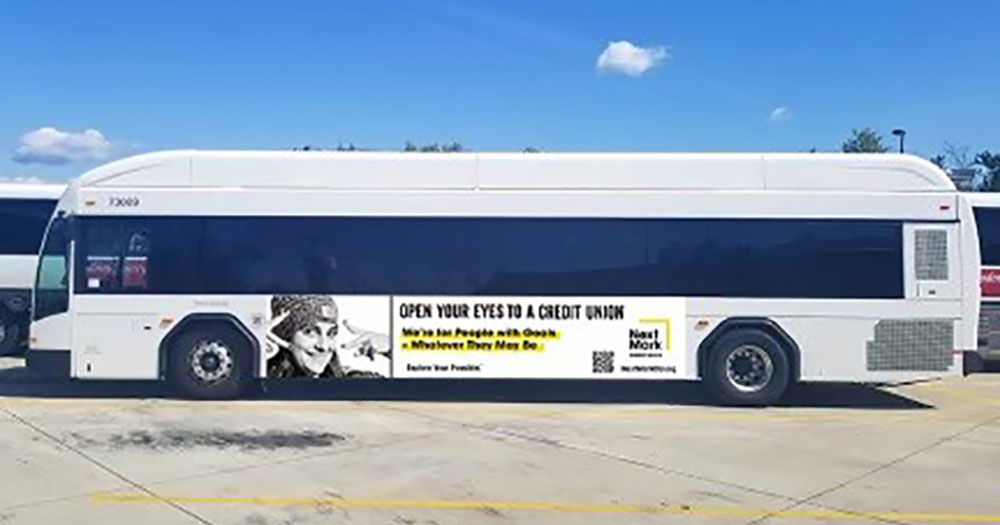 The faces of Marella Nardotti (pictured here) and three of her co-workers appear on local commuter buses as part of campaign to raise awareness of NextMark Credit Union’s new brand.

Her photo from the campaign and that of three co-workers appear in the transit ads, and they’re attracting attention.

“I was in a meeting and got two text messages from people who saw me on a bus,” Nardotti says. “It’s also raising awareness in a new county where we’re focused on growth. It’s great that we're able to penetrate that entire area.”

The ads also include a QR code that links to NextMark’s website for product and other information and allows Nardotti to track interest.

Other elements include branch posters and employee email signatures, which generate conversations about the campaign and the credit union.

One key to success was the decision to launch the campaign internally before releasing it to the public, Nardotti says. Not only did the internal launch garner staff buy-in, it helped employees bond.

‘If we unite our forces and take advantage of the resources that are available to us, we can make a larger impact in our community.’
Marella Nardotti

Nardotti hired a photographer to take staff’s “Open Your Eyes” photo and brought everyone into the office for the shoot after a year apart due to the pandemic.

“It was great to see everybody interact after they hadn’t seen each other in more than a year,” she says. “Their personalities really came out when they did the poses for the Open Your Eyes campaign. They loved it, and it created a sense of community. It revived our culture and connected us during a time when we felt so disconnected.”

Open Your Eyes creates a human connection with consumers and among credit unions, Nardotti says.

“We’re all in this together,” she says. “If we unite our forces and take advantage of the resources that are available to us, we can make a larger impact in our community and raise the awareness we need to grow our industry.”