Having difficult conversations with members

East River Federal eases discomfort among members who struggle with their finances.

The most difficult step in any financial well-being strategy is the first one: getting members to talk about their finances.

Tanya Hobson is familiar with this challenge. Before taking over as CEO at $48 million asset East River Federal Credit Union, Madison, S.D. Hobson worked in business development. In that role she hosted many lunch-and-learn sessions on financial literacy and education.

“There aren’t a lot of people who are eager to raise their hand and say, ‘I don’t know how to handle my finances,’” Hobson says.

Hobson turns the negative into a positive by making financial well-being more personal and a natural part of members’ interactions with the credit union. At East River Federal, employees initiate conversations about financial well-being when the opportunity for improvement arises during the course of business.

Identifying those opportunities is the obligation of staff, regardless of their responsibility or position with the organization. The credit union trains all employees in financial counseling because Hobson takes financial well-being literally.

“When we train our team, we tell them we’re essentially financial physicians,” she says. “People go to a doctor to get well and we want them to come to the credit union to be financially healthy.

‘When we train our team, we tell them we’re essentially financial physicians.’
Tanya Hobson

“You can Google your symptoms or look them up on WebMD but you still have to go to the doctor or eventually you’ll get sick,” Hobson continues. “We have to help our members overcome their financial symptoms.”

For its efforts, East River Federal received a 2021 Desjardins Adult Financial Education Award, which honors credit unions, chapters, and leagues for their commitment to financial literacy.

Hobson likens first connections with members on financial well-being to sales in that both take persistence and accountability.

“Employees have to get comfortable with it,” she says. “Pretty soon they realize they’re improving our members’ financial lives and the light goes on. I’ve had employees tell me how rewarding that can be.”

Hobson says being a smaller credit union in a small community can be an advantage.

“A lot of our employees have grown up in this area and some have gone to the college here,” she says. “They know our members and they know what they’ve gone through. If they can help them get out of a vicious circle, it's an awesome feeling.” 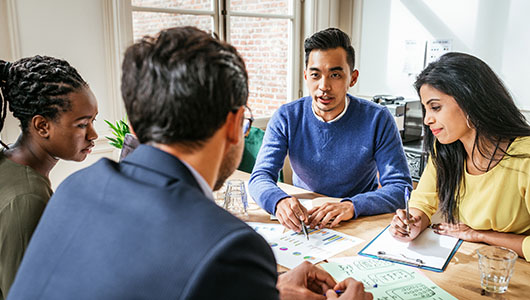 She shares the story of a teenage girl who recently started her first job.

“One of our employees was always great about asking her when she was going to get a debit card to go with her account. Her parents set up an account for her, but they didn’t believe in giving her a debit card. Managing money with a debit card is an important lesson for a teenager, so it was good that the employee would ask her about it.”

As luck would have it, Hobson ran into the teen’s mother at a community fund raiser. “The mother said to me, ‘You’re putting all these ideas in my daughter’s head about getting a debit card,’” Hobson says.

“So, I explained to her why it’s important to have a debit card today. People just don’t deal in cash anymore, and that’s how you manage your checking account. I provided her information about our online education system via our Greenpath partnership so her daughter could receive additional financial education prior to getting a card.”

The mother relented and the girl received a debit card. “Now she’s ready to go off to college and she can manage her own account,” Hobson says.