Home » Mixed signals on the unbanked and the cashless
Leadership

Mixed signals on the unbanked and the cashless

While more people have banking relationships, disparities by race and income persist.

A pair of recently released studies sheds valuable and potentially encouraging light on the state of access to U.S. financial services. At the same time, both reinforce the notion that the same data can be interpreted to support quite different perspectives.

The more comprehensive of these reports is the Federal Deposit Insurance Corp.’s (FDIC) bi-annual National Survey of Unbanked and Underbanked Households. According to the most recent FDIC data (gathered in June 2021), the percentage of households lacking a checking or savings account at a credit union or bank fell to 4.5%—the lowest level recorded since the survey’s 2009 inception.

Per the agency, the unbanked rate has declined consistently since reaching a high of 8.2% in 2011.

Embedded within these figures, however, clear disparities by race and income persist. The unbanked rates for Black, Hispanic, and White households are a respective 11%, 9%, and 2%.

And among households earning less than $50,000, the ratio continues to hover near one in 10.

FDIC points to affluence as the primary driver of recent gains. The agency estimates that improved economic circumstances account for roughly half of the decline in the unbanked rate over the past decade.

There’s no conjecture of whether a reversal in economic fortunes would be expected to spur a banking exodus.

It’s also interesting to note that one-third of newly banked households in the most recent cycle attributed the receipt of government payments during the pandemic as a factor in their decision to open an account.

Hopefully, this will prove to have been an on-ramp for long-term banking relationships. But I can’t help but wonder whether these accounts remain at higher risk of attrition. 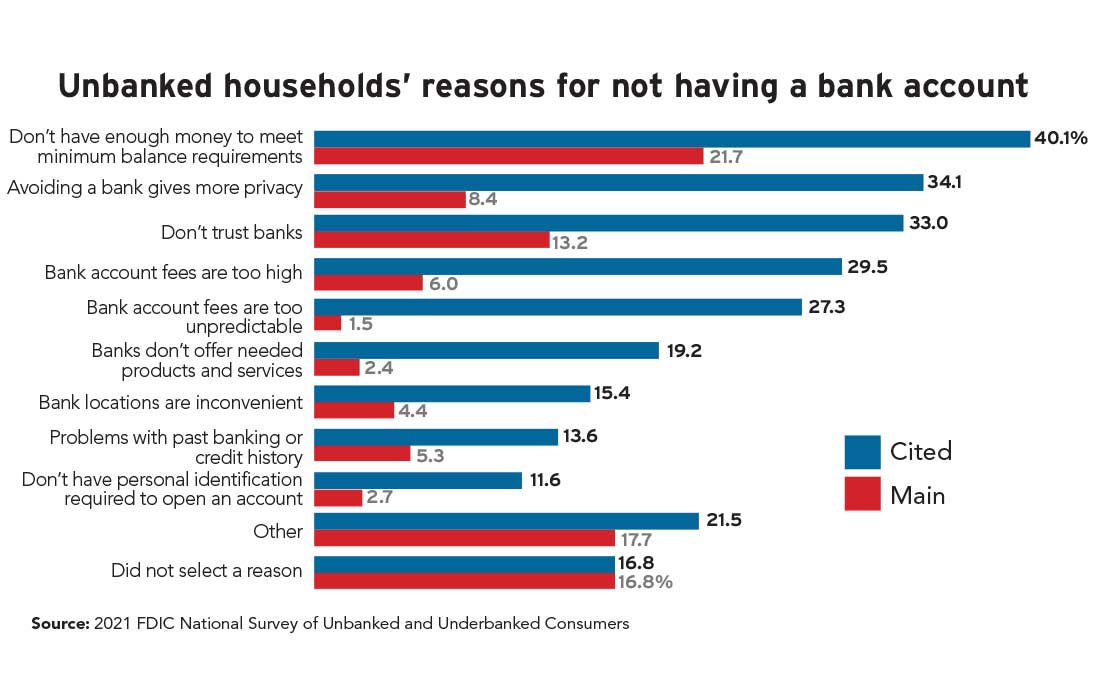 The reasons given by unbanked households for not having an account are equally enlightening. Federal Reserve Board Governor Christopher Waller recently claimed that four of five unbanked households remain so by choice, implying the exclusion rate driven by institutional factors has fallen to near 1%.

Although I’m unable to reconcile to his number, I do see Waller’s point.

The second and third most commonly cited objections—"avoiding a bank gives more privacy” and “I don’t trust banks”—are arguably outside financial institutions’ control.

On the other hand, the top reason (“don’t have enough money to meet minimum balance requirements”) and No.s 4-8 (“fees are too high/too unpredictable,” “don’t offer needed products/services,” “inconvenient locations”) can be read as calls to action.

FDIC categorizes an additional 14% of households as “underbanked” based on a rather liberal definition encompassing households using any of a variety of nonbank credit and payment services.

The question of personal choice enters this equation as well: Have these households consciously decided to “pay for convenience?” Are they aware of more economical alternatives? Or is it possible some entities outside the traditional banking system offer a demonstrably better solution for certain use cases?

The FDIC study provides a solid baseline for further research in this area.

The headline of a July Pew Research Center survey proclaims, “More Americans are joining the Cashless Economy.” While factually accurate, the statement masks some important nuances.

Pew finds that the share of Americans who report using no cash for purchases in a typical week has skyrocketed to 41%, up from 24% just four years earlier. (While no measurement was taken in 2020-21, it’s fair to assume 41% actually reflects a decline from a pandemic high.)

At the same time, the cohort using cash for all purchases has fallen more slowly, but is down to 14%.

Conversely, the group earning more than $100,000 remains the only group for which more than half claim to make no cash purchases.

In other words, while the U.S. continues its steady march toward a proverbial “cashless society,” don’t make plans to retire those pesky notes and coins anytime soon.