Member Benefits
Learn more
Learn more about the benefits of membership.
Home » Getting Through the Gridlock
Compliance

Getting Through the Gridlock

CUs ‘Plan to Win’ despite hyperpartisanship and intense gridlock.

Comedians regularly tell jokes at the expense of Congress due to its ineptitude and inefficiencies.

Americans are frequently frustrated with the branch of government ironically billed as the “greatest deliberative body in history.”

This is true when Congress functions well and when it doesn’t.

Sadly, it’s hard to overstate the magnitude of Congressional gridlock. The 112th Congress holds the dubious distinction of being the least productive Congress since World War II. Of the more than 12,000 bills introduced during its two-year seating, only 240 (less than 2%) were enacted into law.

This enactment rate is a decrease from the previous Congress, and about half that of the 110th Congress.

Consider that the 80th Congress—dubbed the “do nothing” Congress by President Harry Truman—enacted 7.5% of the bills introduced. Since then, Congress has generally enacted between 3% and 6% of bills introduced. 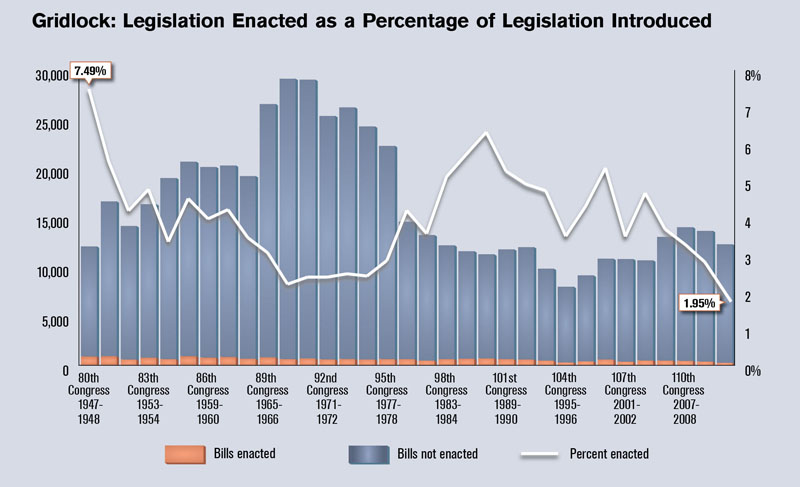 This is not to suggest that the 112th Congress sat idle, but most of the time its wheels were spinning. The House passed 863 bills and the Senate 880, but a much smaller number of these found the finish line.

These numbers are a lot like crime scene photos: They show what happened but they don’t shed much light on why it happened. As we consider the legislative environment for the 113th Congress, the gridlock of the 112th Congress is instructive because the dynamics are not expected to change much.

First, let’s look at the House. The lower chamber has an advantage in terms of moving legislation because majority rule generally governs the body.

So, the Republican majority can move its agenda without significant obstacles. Many of the bills the House sent to the Senate, however, had no chance of being considered, much less passed. In some cases, the House passed bills merely to make a political statement, not to make laws.

It was, aft er all, a presidential election cycle. In other cases, the House got into issues the Senate preferred to avoid. A good example of this is housing finance reform. The House sent several bills dealing with Fannie Mae and Freddie Mac to the Senate, but the Senate had no interest in dealing with the issue.

The problems in the Senate were more complicated. The Democratic majority faced significant challenges simply bringing legislation to the floor. Between April and August of 2011, for example, the Senate did not pass a single bill “regular order,” whereby a bill is brought to the floor, debated, opened to amendment, and passed.

It’s important to remember that the Tester debit interchange amendment was considered on a piece of legislation that never made it through the Senate.

Even if we had been successful in getting 60 votes, the outcome likely would have been the same: Congressional pressure on the Federal Reserve to increase the rate ceiling, not a statutory directive to delay implementation.

Election year politics combined with parliamentary tactics played a significant role in the Senate gridlock. Senate rules essentially require 60 votes to do just about anything, and the majority party had only 53 votes.

To move any legislation, the Democratic majority needed a handful of Republican votes. This gave Senate Republicans leverage to secure the political votes they sought.

In response, however, the majority generally moved to restrict consideration of any amendments. The minority party responded to this move by filibustering the motion to proceed to legislation.

These procedural tactics fueled a debate over filibuster reform that essentially brought the chamber to a complete standstill during the lame duck session. These circumstances contributed to the decision not to pursue a vote on the member business lending legislation. There was no way to get a fair vote.

Financial services legislation had a challenge of its own because there was not much activity in the Senate Banking Committee. While the committee held dozens of hearings, it reported only four pieces of legislation to the Senate.

This inactivity complicated our efforts on member business lending, ATM fee disclosure, privacy notification, and Consumer Financial Protection Bureau (CFPB) privilege legislation because it’s much easier to move legislation if it has the committee’s endorsement. In the end, we were able to enact only two of our four priorities.

With the inability of Congress to get even the most routine legislation enacted, bills that had historically received broad bipartisan support encountered significant resistance and delay.

Congress enacted none of the 2013 appropriations bills before the end of the fiscal year. And we’re all painfully aware of the difficulty getting the fiscal cliff legislation enacted at the end of 2012. Hyperpartisanship was the order of the day, consensus was elusive, and gridlock was the result.

There’s a strong argument to be made that Congress is at its best when it does the least. That argument, however, is less palatable when you have an agenda requiring Congressional action. And credit unions have an agenda.

NEXT: How do CUs break through the gridlock?