Get started now, experts tell CUs.

It’s a point of pride for the U.S. to operate differently than the rest of the world on many fronts—still waiting for that metric revolution, are you?

But the adoption of EMV card technology is inevitable, and it’s going to happen quickly.

EMV (Euro MasterCard/Visa) is a global standard for credit and debit payment cards based on chip card technology, according to CO-OP Financial Services, which offers an "Ask the Expert" portal for all things EMV-related.

According to a time line announced by Visa and MasterCard, the magnetic stripe version of credit, debit, and prepaid cards will be antiquated by 2017, thanks to a shift in counterfeit fraud liability to merchants and financial institutions who decline to service EMV cards.

The dramatic shift to these cards, which carry an embedded microchip, will essentially change every aspect of the plastic card system. Credit unions could bear the cost of swapping out members’ cards and upgrading their ATMs, as well as adapting their data processing systems, fee programs, authorization methods, and fraud tools. 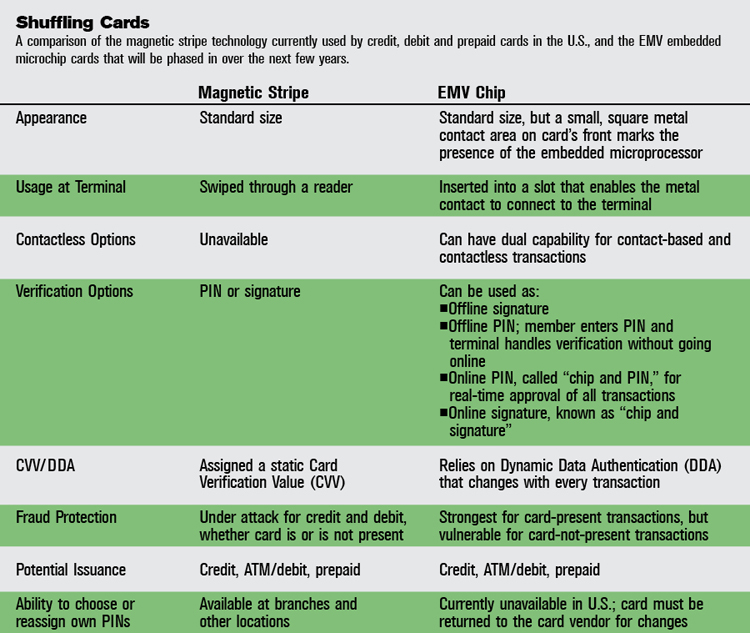 Beyond standardizing worldwide payment systems, EMV technology—which is the standard in western Europe and widely used elsewhere, with more than 1.5 billion cards circulating worldwide—promises to be more resistant to fraud because it uses a dynamic verification value that changes with every transaction.

How should credit unions prepare for this shift? Teri Koenke, vice president of product development at PSCU, and Mansel Guerry, president/CEO of Credit Union 24, offer 12 tips:

1. Assume EMV will happen soon. “The longer you debate whether to get off the curb and compete in the race, the further behind you get,” Guerry says.

2. Go to school. Learn about EMV now so you can use your next strategic planning session to decide when and how to launch chip cards.

3. Sign up now. As deadlines near, demand on conversion services will rise. Get on the list now to prevent delays later.

4. Understand the implications. “We’re redesigning the payment experience,” Koenke says. “Because many aspects of the plastic card program will need to change, EMV presents the issuer with the opportunity to evaluate the program in its entirety and introduce other beneficial changes.”
5. Run a pilot. There’s no substitute for firsthand experience by staff and, later, small segments of your membership.

6. Start with travelers. International travelers are already experiencing problems with magnetic card acceptance overseas. Develop a solution that meets their needs to gain EMV experience.
7. Educate, educate, educate. Educate staff first, then members, using every available channel. Koenke sums up the key message for members with a single sentence: “We’re making you safer with easy transactions that will offer the same experience anywhere in the world.”

9. Monitor mobile payment preferences. “It's too early to predict whether or not mobile will emerge as the consumers' payment method of choice,” Guerry says. He advised credit unions to closely observe consumer preferences for mobile and EMV payments.

11. Expect fraud to evolve. Hackers and fraudsters will keep trying. Make sure your EMV card program addresses all angles of future fraud with measures such as avoiding predictable PIN numbers.

12. Rely on multiple partners. Processors, payment networks and other vendors are offering free EMV white papers and webinars along with personal advice. Tap those resources to benefit your program.