Member Benefits
Learn more
Learn more about the benefits of membership.
Home » Boehner: America Is on the Verge of a Renaissance

Boehner: America Is on the Verge of a Renaissance

Congress must find common ground to provide a framework for the future. 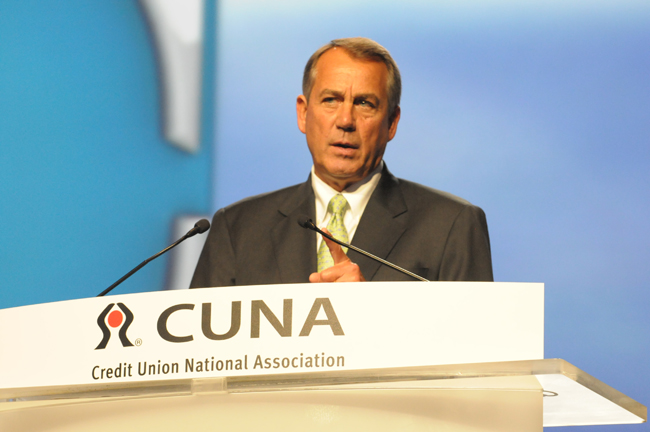 America is on the verge of a renaissance, Speaker of the House John Boehner told credit unions during yesterday’s special General Session.

“We’re moving quickly toward energy independence,” he said. “The innovation and technology in the past several decades have allowed American oil and gas producers to go into old oil fields and find gas still locked in the ground.”

This will give American manufacturers a competitive edge internationally, he said. But first three things must happen:

1. Fix our tax code. “I hope we’re on the verge of moving a tax reform bill that will lower rates for all and clean out some of the loopholes.”

2. Do something about the $16 trillion debt. Americans have to grapple with this issue. With millions of baby boomers retiring each year and the current state of entitlement programs, the “whipsaw” effect on our budget is tremendous.

These efforts will ensure economic growth for generations and allow the energy renaissance to continue.

“A lot of people believe the American dream is in peril. But it doesn’t have to be that way,” Boehner said. “Leaders in this town can put their political differences aside and find common ground to address the needs of our country. “It’s going to take all of us.”