Member Benefits
Learn more
Learn more about the benefits of membership.
Home » Cantor: CUs in Washington at a Critical Time

Cantor: CUs in Washington at a Critical Time

Congress has much to learn from CUs, the House Majority Leader says. 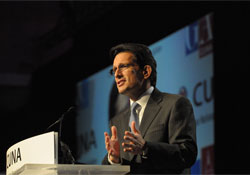 “I know our credit unions at home are focused on community, I know that you are focused on helping your members and giving back to community,” he said. “I think that the advice I would seek from you is how to best apply that here in Washington.”

Americans want the U.S. Congress to seek common ground, the same common ground credit unions find in their communities, Cantor noted. Too many people are affected by "a stagnant economy," and those are the people that credit unions hear from and serve.

Cantor noted GAC attendees are in Washington at a critical time in the nation's history, as Congress is dealing with controversial issues such as deficit reduction and tax reform.

Cantor said he wants credit unions to work with legislators “as partners in the mission of making life work again” for credit union members and for the people of this country.