Member Benefits
Learn more
Learn more about the benefits of membership.
Home » Warren Lauds CUs for Shining Brightly During Recession

Warren Lauds CUs for Shining Brightly During Recession

‘CUs worked hard to lead our economic recovery.’ 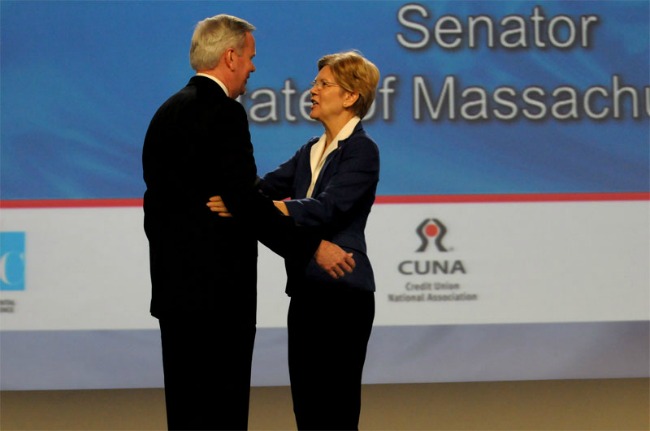 Sen. Elizabeth Warren (D-Mass.) praised credit unions Wednesday for looking out for people across her state and around the country.

“That’s what credit unions do,” she said. “They work for their members.”

Recalling the nation’s financial crisis, the senator said that as one Wall Street banking scandal after another unfolded, credit unions remained a bright spot in the financial industry.

“Credit unions did not break this economy. They did not build business models around tricking their customers. When the economy faltered, they did not turn their backs on the families and small businesses that needed them.

“On the contrary, credit unions worked hard to lead our economic recovery, responsibly and reliably providing credit to their members that need it,” said Warren, who was instrumental in establishing the Consumer Financial Protection Bureau [CFPB] before winning election to the Massachusetts Senate. “The credit union motto says it all: ‘Not for profit, not for charity, but for service.’ ”

“While credit unions continued to provide clear, high-quality service for millions of Americans, a different form of pricing had become all too prevalent elsewhere. Too many credit card companies and mortgage lenders used a low advertised price on the front end to entice customers, and then made their real money with fees and charges and penalties and re-pricing on the back end. The costs and risks of products became harder to see, which meant that comparison shopping was almost impossible and the market became less and less efficient.”

“When I set up the CFPB I wanted to increase transparency in the marketplace and to level the playing field for credit unions and other providers that want to do right by consumers.”

Warren criticized GOP opposition to confirming a CFPB director and asked credit unions to encourage lawmakers to approve his appointment.