Ten easy steps to serve crooks your identity on a silver platter. 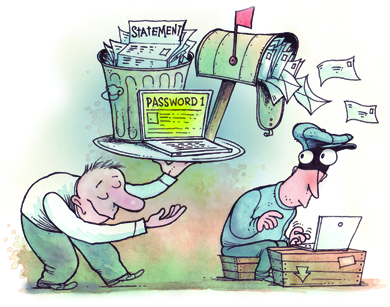 My wife dragged me to the movie “Identity Thief” recently. In retrospect, it wasn’t a bad movie. I rank it up there with such memorable comedies as “The Deficit Debate” on C-SPAN.

After the first 20 minutes, I thought about doing the reverse of what I used to do as a teenager: sneak out of the theater. I dismissed the plan as too risky; my wife still has not forgotten about my two hour trip to the restroom when we went to see “La Boheme.”

As the movie dragged on like a dull razor, my mind began to wander. What if my identity had been stolen? How would I feel about it? Would I be upset and angry to the point of hostility? Or would I be benevolent and flat, like all of the jokes in this movie?

As I pondered the thought, the sugar from my 12-gallon bucket o’ pop mingled with the fake-butter flavor from my jug o’ popcorn and an odd (if not indigestible) plan emerged.

What really would teach these scoundrels a lesson is being forced to take over my complete persona— not just my Visa card. If they had to deal with three kids in college, a house badly in need of a new roof, and a collection of pets that would make the National Zoo jealous, then they might reconsider their actions.

In fact, I came up with 10 ideas to expedite the process:

1. I resolve to only use my credit card online, exclusively with retailers gleaned from Facebook posts and forwarded emails.

2. I will lower the security settings on my browser from “moderate” to “low” and keep going until I reach “nonexistent.”

4. I will come to the realization in my email inbox that somebody DOES want to meet me, that some pills will make me happier, and that a lower payment on some loan is exactly what the doctor ordered.

5. I will post my address, phone number, and other information on social networking sites, along with updates such as “Taking a three week vacation. Hope we don’t get broken into. Our security system isn’t working!”

6. I will be sure to tell my credit union that I will be traveling to exotic locations over the next year and not to worry about any transactions that seem out of the ordinary. Not that I plan to travel, mind you.

7. I realize that asking me to memorize numbers is as useless as asking a Kardashian for marriage advice. Thus, I shall henceforth write my PIN on the back of my card.

8. I will revoke my e-statement selection and go back to paper. Not that I will open it. It’s easier just to throw it into my curbside trash, unopened.

9. I will acknowledge that, although obtaining a free credit report is as convenient as accessing annualcreditreport.com, I am so busy with Farmville I simply have no time to check it.

10. And finally, every time my antivirus soft ware warns me the online game I’m playing is “potentially dangerous soft ware,” I will disable said antivirus program. If I wanted to be told about everything I shouldn’t be doing, I would just reactivate the voice of my GPS.

While NOT taking any of these steps seems to be common sense, for too many members, it appears that common sense is as scarce as a banker at a corporate ethics convention.

So, perhaps rather than telling members what not to do, we should take the difficult ones and tell them the opposite of what we want them to do. This, for example, is how you deal with teenagers.

And it’s why I told my wife, “I cannot wait until you take me to the next movie!”