If you’re in New York City between April 15 and July 4, look up: CUNA has arranged for the iconic CBS screen on 42nd St. in Times Square to promote credit union membership and highlight credit unions’ low rates and fees. 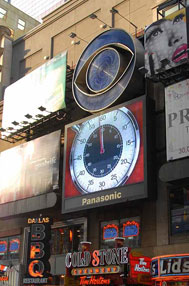 The screen also will urge consumers to find a credit union at aSmarterChoice.org.

“CUNA and the leagues developed and launched aSmarterChoice to raise consumer awareness about credit unions and grow membership,” notes Paul Gentile, CUNA’s executive vice president of strategic communication and engagement. “We are thrilled to have our message running so prominently in one of the most famous venues in the world, during one of its busiest periods.”

The full-motion, 15-second ad will repeat hourly on the CBS Screen, which is 26 feet wide and 20 feet high. The message tells consumers if they want a bank they can trust, they should go to a credit union for better rates, lower fees, and no stockholders competing against their interests.

“Since launching the site, we’ve seen a significant spike in visitors whenever it is featured in the media,” Gentile notes. “We anticipate a significant boost in traffic to the site as a result this ad run in Times Square. That means more people from all walks of life discovering and joining credit unions. It is a great example of how we are putting our new strategic vision into practice.”

This initiative revolves around the vision that Americans choose credit unions as their best financial partner. It’s based on credit unions’ shared values: cooperative, collaborative, member-centric, community focused, and dedicated to their members’ financial well-being.