Most consumers want payment services from their primary financial institutions.

Offering real-time payments can increase convenience and help consumers better manage their financial lives, according to a study released by FIS.

The report also reveals that consumers look to their primary financial institutions as the first choice for real-time payment services. 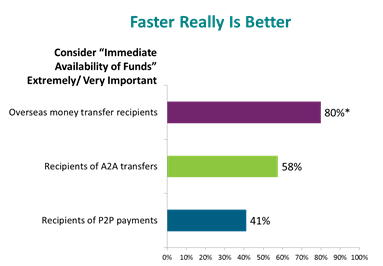 Overall, the study underscored that real-time payments resonate with consumers and that the immediate availability of funds is very important, both from a sender and a receiver perspective.

To that end, 80% of overseas money transfer users believe it’s important for their recipients to be able to use the money they send to them immediately. Also, 58% of A2A users and 41% of P2P recipients want to have immediate access to their funds.

“It’s peace of mind. It’s less stressful to know the funds are there right away,” according to a survey respondent.

Most consumers agreed that real-time payments would make banking more convenient and help them manage their money better.

►Strong adoption potential. Consumers reported they would use real-time payments—if available through online banking or a mobile banking app—for a significant percentage of their transactions.

►Reaching the mobile consumer. Four out of 10 survey respondents who use outbound foreign money transfer and P2P services want to be able to access real-time applications through their mobile phones.

For P2P payments, nearly as many Gen Y respondents (those age 18 to 33) prefer to use mobile phones to make real-time payments as those who prefer computers and laptops. 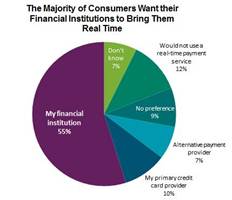 “The findings of our survey underscore the fact that real-time money movement is clearly resonating with the majority of consumers, and particularly with key consumer segments like Generations X and Y,” says Anthony Jabbour, executive vice president, North American Financial Institutions, for FIS. “The research confirms that mobile technologies will be a catalyst for real-time payment adoption.”

For example, among consumers who conduct person-to-person transactions, 74% of Gen Y want the ability to conduct real-time P2P payments using their mobile phones and nearly half of the Gen X and younger boomer segments also want this capability, he says.

“As a result, financial institutions have a tremendous opportunity to establish themselves as the foundation for real-time money movement services, not only through the online channel but increasingly through the mobile channel,” Jabbour says.