Member Benefits
Learn more
Learn more about the benefits of membership.
Home » Move Members from the Showroom to Your Lobby
Lending

Move Members from the Showroom to Your Lobby

CUs concede it’s a challenge to turn ‘indirect’ members into PFI members.

CUs concede it’s a challenge to turn ‘indirect’ members into PFI members.

Indirect loans made up 56.7% of all credit union auto loans in 2012, according to CUNA’s economics & statistics department. That translates into lot of new members entering the credit union, perhaps many for the first time. How do credit unions onboard these new members and turn them into loyal members who use multiple products and services?

“It’s a challenge we all face,” admits Kendall Garrison, senior vice president for lending at $612 million asset Amplify Credit Union, Austin, Texas. The conversion rate for the industry is in the 1% to 1.5% range, Garrison points out.

Acquiring new members via the indirect channel can be a source of loan and membership growth. But the benefits are far greater if these new members sign up for and start using additional products and services, perhaps someday calling their credit union their primary financial institution (PFI).

“Indirect lending is like a doorway into the credit union,” says Jade Beckman, vice president of consumer lending for $3.4 billion asset Mountain America Credit Union, West Jordan, Utah. He says indirect lending serves two purposes for his credit union: It’s an opportunity to obtain new members and it strengthens the relationship between the dealership and the branch.

Though some credit unions are seeing success, they admit it’s not easy to onboard these new members.

But developing an onboarding strategy will be huge as the auto industry continues its comeback. “Indirect lending has consistently picked up during the past few years along with the rest of the auto industry,” says Riley Williams, partner with Koger & Williams Cos. , Chattanooga, Tenn.—a company that advises credit unions on indirect lending programs.

The financial crisis led to a widespread distrust of many of the nation’s largest banks. As a result, some formerly loyal bank customers gave credit unions a try when they went car shopping, says Tony Boutelle, president/CEO of CU Direct Corp. And these new members who come through an indirect lending program can ultimately become loyal members. 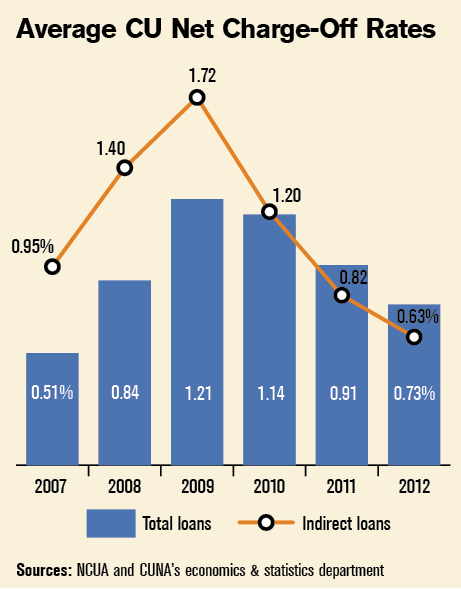 “About 90% of auto loans are consummated at the dealership,” says Williams. “To be successful, you have to be in indirect lending.” About 80% of a credit union’s indirect loans come from new members, according to Williams.

Boutelle says one of the most important issues to many dealers is the speed of funding the loan. CUDL, owned by CU Direct Corp., provides technology to facilitate this process.

Even without an aggressive onboarding program, credit unions should be able to get about 6% of new “indirect” members using additional products and services, according to Williams.

With a more aggressive approach, a credit union should be able to boost that figure to at least 20%, Williams says. To successfully convert indirect members, it’s also important for credit unions to have a culture—from top to bottom—that values cross-selling and onboarding, says Williams.

While credit unions want to add more members and gain a larger wallet share, Boutelle cautions credit unions to have realistic goals. Successful onboarding programs can expect to get between 10% and 25% of new members using additional products and services. Most credit unions see numbers way below that.

Sometimes even the most sophisticated marketing strategies won’t be enough to convince members to use more products and services, Boutelle adds. If a credit union doesn’t have a branch near an indirect member’s residence or workplace, it’s difficult for that credit union to gain additional business from those new members.

Deposit accounts are a much tougher sell than credit accounts, Boutelle says, even though online banking has made physical proximity of a branch less of an issue. That’s because consumers are reluctant to switch what many consider to be a “sticky” financial relationship.

Boutelle recommends easing members into additional products and services, rather than trying to market everything at once.

“Keep the message simple,” he adds. “Many credit unions have had success by leading with a credit card offer first.”

A credit card or another nonauto loan offer is a natural extension because the credit union already has all the necessary information from the indirect auto loan application to make a credit decision on a different product. And the member can accept a new loan or credit card without consideration of the credit union’s branch location.

The auto loan application should provide additional marketing intelligence, according to Garrison. “In 2012, we put together an in-house soft ware team and tasked that team with building a data warehouse to determine the next best product for each member.”