Turn a sizeable fee advantage over banks into membership growth and retention.

Credit unions offer a powerful combination of essential member services and member-friendly fees. But striking the right balance between your credit union’s fees and its financial viability can be a tricky balancing act.

“It’s a lot easier to grow your membership—and retain the members you have—if you have a favorable and competitive fee structure,” says Jon Haller, CUNA’s director of market research and co-author of the CUNA 2013-2014 Fees Report.

But a slow-moving economic recovery and shrinking margins mean a greater dependency on fees. Noninterest income (including fees) represented 28.6% of total income for credit unions as of yearend 2012. And without fees and other income, credit unions’ return on assets (ROA) would be a negative 61 basis points.

Credit unions’ sizeable fee advantage comes at a time when consumer dissatisfaction with the banking industry remains high. By offering a low-fee alternative to banks, many credit unions have turned this dissatisfaction into a significant membership growth opportunity.

More than 70% of consumers would consider leaving their current financial services provider if it raised checking fees, according to Bankrate’s 2012 Checking Survey (bankrate.com). Credit unions, however, continue to charge lower fees than banks for financial services—and they’re less likely to charge fees in the first place.

Consistent with past trends, credit unions are leading the way in providing affordable, consumer-friendly checking accounts. These accounts serve as the cornerstone product for building stronger financial relationships with members. Checking account use is tied to use of other services, member loyalty, and an improved bottom line. 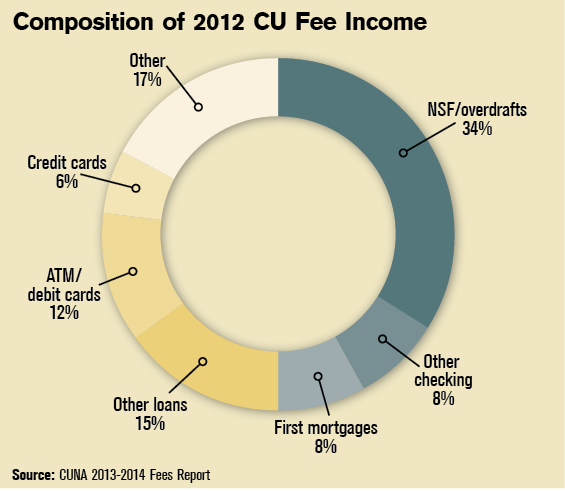 Free checking—an account with no monthly fee and no minimum balance requirement—is a big draw for consumers. Eighty-two percent of credit unions that offer checking accounts offer at least one free checking program.

Conversely, the percentage of banks offering free checking has been decreasing since 2010. Only 39% of banks currently offer free checking—a steady decrease from 76% in 2010 and 45% in 2011, according to Bankrate’s survey. “That’s a major opportunity for credit unions to position themselves against their competitors,” notes Haller.

Nearly 60% of credit unions that offer interest-bearing checking accounts do not charge a monthly maintenance fee. Only 8% charge this fee, while 32% waive the fee if the checking account meets a certain minimum balance requirement.

Consider, too, the striking contrast between banks and credit unions where an average minimum balance is required to avoid fees. The credit union average of $1,010 is $5,000 lower than the bank average of $6,118, according to the Bankrate survey.

And among credit unions that charge monthly maintenance fees, the average is $6.36—less than half the average $14.75 bank fee.

Eighty percent of members with credit union checking accounts consider their credit union to be their primary financial institution (PFI)—the financial services provider they rely on for most of their business, according to CUNA’s 2011-2012 National Member Survey.

By convincing members to use online banking and a balance-carrying product (such as a car loan or a money market account) in conjunction with checking, credit unions can dramatically increase member loyalty. Loyal members will recommend their credit unions to others, and they’ll return to their credit unions the next time they need financial products or services.