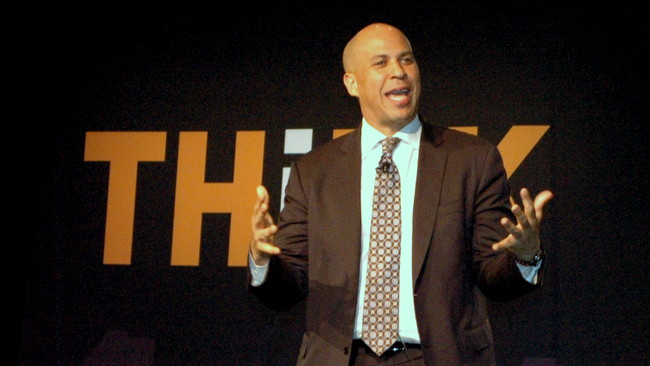 “I always encourage people to be bolder,” Cory Booker, mayor of Newark, N.J., told attendees of CO-OP Financial Services THINK Conference this week in Chicago. “The times I’ve learned the most are when I’ve taken the most risks—and failed.”

In his first term as mayor, Booker described how “we started challenging the conventional wisdom and started articulating our vision. We brought people together and created a collective strategy of change and a conscious conspiracy of love.”
This included encouraging people to move out of their state of “sedentary agitation,” he says. “The productivity of the city shot up, we used technology to innovate, and we created innovations in youth courts and the jails.”
The city worked to provide men with mentors and offer them parenting classes, and the city saw its recidivism rate drop. “And we democratized access to education and put classes online,” he adds.
Booker, with nearly 1.5 million Twitter followers (@corybooker), uses social media to connect with the people he serves. It’s a connection so strong that now “I have residents taking pictures of potholes and tweeting their mayor,” he says, very often before the city workers know where the potholes are.
The power of the people must be greater than the people in power, Booker says. “We must continue the course of our nation, but it’s not easy. Life can be a grind. But I am hope unhinged.
“You can’t have great breakthroughs without great frustrations. Life is about purpose—not positions.”
KEYWORDS co-op Cory Booker leadership THINK Conference