It’s not trendy, but the check is still a reliable P2P solution. 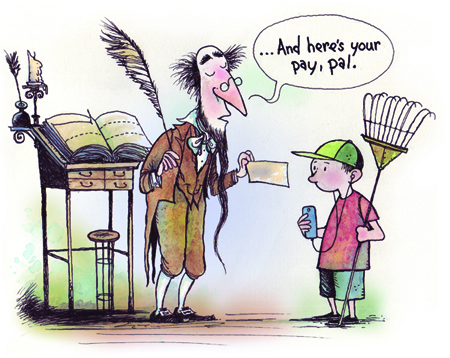 When you think of person to-person (P2P) payments, you might think of some whiz-bang mobile app coupled with a few dilithium crystals and delivered via a teleportation device embedded in the chip that the government implanted in you before you were born. (This might explain your ability to change TV channels without a remote).

But let’s not forget about the noble P2P workhorse—the check.

It’s truly an amazing device—you don’t need electricity to write one, you don’t need authentication from unseen regulatory agencies, and you can still underpay the teenager who mows your lawn. Indeed, paying another person for a product or service has been around since Adam asked the snake, “Will you take a check for that apple?” (To which the snake replied, “no, Visssssssa.”)

In truth, P2P payments are really the lipstick on the pig, a shiny new paint job on a rusty old ’75 Pinto, or any of the creatures from The Real Housewives franchise.

PayPal is probably the most widely known, loved, loathed, and used network. Arriving on the scene in 2000, it quickly found a niche in the growing electronic auction business and was scooped up by eBay in 2002 faster than a meth user at an all-night pharmacy.

PayPal requires both parties of a transaction to be registered with checking accounts tied with each party. Transactions are made through a variety of ways, but normally occur through the ACH channel with credit at a PayPal account. For instant payment, a hold is placed on a user’s account via the debit card network. A small fee accompanies many transactions.

Popmoney from Fiserv is similar to PayPal but offers only ACH transfers, hence the three-day wait for everything. The difference is that there is no intermediary, which Popmoney can do by simultaneously crediting and debiting both accounts, similar to decoupled debit cards. This leaves some risk of insufficient fund transfers as well as fraud risk. Standard delivery typically carries no charge, but higher risk overnight transfers do.

Visa Personal Payments is a variant of Popmoney, with the ability to credit or debit Visa cards (“MasterCard support will be included sometime after the apocalypse,” per Visa). This reduces fraud and timing, but at the expense of making it a Visa-only world.

Dwolla—a credit union favorite— is backed by The Members Group and The Veridian Group of Des Moines, Iowa (where the state motto is: “Corn for a dwolla!”). Dwolla’s major difference is in pricing— transactions under $10 are free and those over $10 are 25 cents. They use ACH (like most others) but have instant transactions if both sides have institutions signed up with Dwolla via an exchange.

Venmo is the least expensive option for most users. It charges only for using credit cards. With virtually no fees, you might think it would be difficult for the company to make a profit, and you’d be right. Venmo struggled financially and was purchased by payment processor Braintree in 2012. It seems, however, to be tightly integrated into the world of social media. Receipts can be posted directly to a Facebook or Twitter account, complete with inappropriate comments.

There are loads of others, ranging from American Express (“Don’t leave home without it—and by ‘it’ we mean the card that probably won’t work where you’re going”) and Google (“Sharing your information freely since 2000”).

As the market develops, offerings seem to be dividing into two groups:

And my favorite—checks. The word on the street is that checks still work. And I can postdate them for that lawn-mowing kid.