Muster your courage, walk across the gym, and say something witty and romantic.

Consumers hold, on average, 3.5 credit cards in their wallets, according to creditcards.com. This begs the following questions:

►Why so many?
►Which ones get used?
►How do you get half a credit card?

A lot of credit union managers lament the state of their credit card portfolios. They talk in terms of “declining,” “stagnant,” or “I dumped that turkey back in 2001”—although that particular person might have been referring to a significant other.

This entire situation takes me back, oddly enough, to my first school dance in junior high. The year was 1978, the season was spring, and the music was courtesy of a cassette mix. 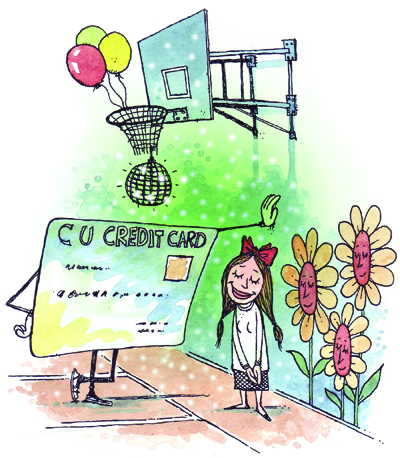 It was an after-school event, and I was apprehensive as I entered the gym. It was the same place that, only hours before, had been the scene of a humiliating game of dodge ball. But the gym had been transformed—thanks to two shiny globes hanging from basketball hoops—into a pulsating disco palace.

Music, blaring through an odd assortment of speakers on the stage, filled the gym, along with the musty smell of old french fries from the adjoining cafeteria. The atmosphere was both promising and foreboding, much like an NCUA exam.

As the lights dimmed, magic happened. As if on some indiscernible cue, groups of boys and girls suddenly formed and then retreated into the furthest reaches of the room, as if repelled by some invisible force. There we waited, staring at each other. The girls giggled and gaped at the boys. The boys, on the other hand, were much more mature as we slugged each other and made inappropriate jokes. On the inside, we dreaded that moment when we would have to dance. We all knew we looked like people trying desperately to keep their balance while slipping on ice.

Credit unions in the credit card market are like boys at a junior-high dance—we awkwardly congregate and complain about how impossible it is to compete with the larger issuers. Our members are the giggling girls, desperately wanting one of us to ask them to dance. The resulting standoff is broken only when an older boy (a larger issuer) strolls onto the scene, says something witty like “0% balance transfer,” and then walks off with the prettiest girl.

At the heart of the problem is the fact that most credit unions treat revolving credit like car loans—the proverbial “one and done.” In reality, credit card lending is a two-stage process. The first stage involves getting the cards into your members’ hands. We’re all pretty successful at this stage. But the first stage is like getting into the dance—all you need is a ticket.

The real work comes in the second stage as you try to get your card used more than the other 2.5 cards in your members’ wallets. This takes some forethought, marketing, and more than just a good rate. It takes segmentation—the art of knowing which members do what they do, why, where, and how oft en.

Some members look for rewards, such as points or cash back. Other members love the prestige of higher credit limits. And still other members (the “good deeders”) look for opportunities to achieve goals through credit cards oft en connected through affinity groups. And, of course, there are those who chase the lowest rate and are always moving balances from card to card.

Alas, this is quite a different beast for many of us. Doing constant promotions and having multiple offerings is often seen as too much work. So there we sit, complaining about how the girls across the room pay too much attention to those older boys.

So I dare you—muster your courage, walk across the gym, and say something witty, smart, and romantic. “Introductory rate!” just might do it.