Emerging Financial Markets Are Opportunities for CUs

Ten million households are unbanked and 24 million are underbanked. 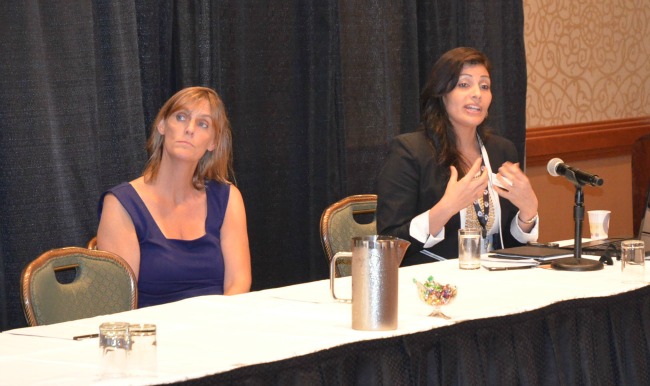 Low- and moderate-income people who are either underbanked or unbanked, along with a growing U.S. immigrant population, present credit unions with opportunities in emerging markets. That’s the message attendees heard at a workshop Sunday at the 2013 America’s Credit Union Conference (ACUC).

The Emerging Markets Workshop—hosted by Cathie Mahon (above left), president/CEO of the National Federation of Community Development Credit Unions, and Miriam De Dios (above right), CEO of Coopera—presented the characteristics of the emerging market that create opportunities for credit unions to seize. Coopera is the only emerging-markets company in the credit union industry with an exclusive focus on the Hispanic member.

De Dios said emerging markets include underserved/unbanked, low-income, Hispanic and immigrant populations. Growth opportunities should reflect a credit union’s membership as well as increase membership and product and service use, she added.

“Hispanics are the largest, fastest-growing, youngest, and most-underserved U.S. market,” De Dios said. Hispanic market segmentation and the impact of immigration reform are opportunities and strengths for the credit union industry, she added.

Coopera’s mission is to partner with people, businesses and communities for new economic development, she said. Coopera and CUNA are in an alliance to grow Hispanic membership.