It can play a strong role in CUNA's 'Don't Tax My CU' initiative. 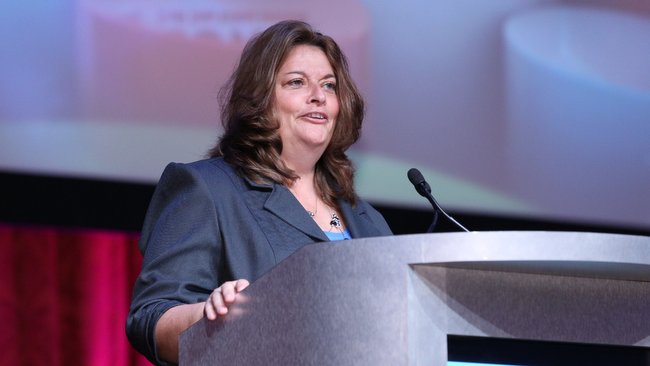 Social media can be the catalyst to activate and rally millions of Americans to help credit unions achieve their goals, Pat Wesenberg (above), CUNA board chair and president/CEO of Central City Credit Union in Marshfield, Wis., told attendees of the 2013 America’s Credit Union Conference (ACUC) this morning.
“Frankly, with our emphasis on people power--which is growing every day, as our recent membership growth shows--the use of social media is right in our wheelhouse,” Wesenberg said.
Kristen Christian's Bank Transfer Day efforts, spawned through social media, contributed to the addition of more than two million members from midyear 2011 through the end of last year, she added.
Facebook still remains the social media behemoth--with more than 1.1 billion users worldwide, Wesenberg explained. Nearly 50% of Facebook users 18- to- 34 years old check their Facebook page when they wake up in the morning. And 28% of these young Facebook users check it before they even get out of bed, she added.
“Social media is engrained around the world and here at home as the communications medium of choice for millions,” said Wesenberg.
Social media can perform a strong role in CUNA's Unite for Good program and Don't Tax My Credit Union initiative, Wesenberg noted.
“We also know, the vast majority of our members--especially our most loyal members, more than 40 million who consider a credit union their 'primary financial institution'--will stand with us,” Wesenberg said. “All we need to do is activate them. Because if we use social media the right way today, it can become the most effective way for rallying our members.”