Member Benefits
Learn more
Learn more about the benefits of membership.
Home » The End Is Near!
Operations
Trendlines

The End Is Near!

The end is near—at least for the Federal Reserve’s asset purchase program known as quantitative easing. The Fed has used this tool to purchase $40 billion in mortgagebacked securities and $45 billion in longer-term Treasury securities each month since December 2012.

These purchases put downward pressure on long-term interest rates, including mortgage rates. After a much-anticipated June 19 Federal Open Market Committee statement, however, the bond market sold off due to expectations that the Fed would begin tapering its asset purchase program later this year and end the program in mid- 2014, when the unemployment rate is expected to fall below 7%. 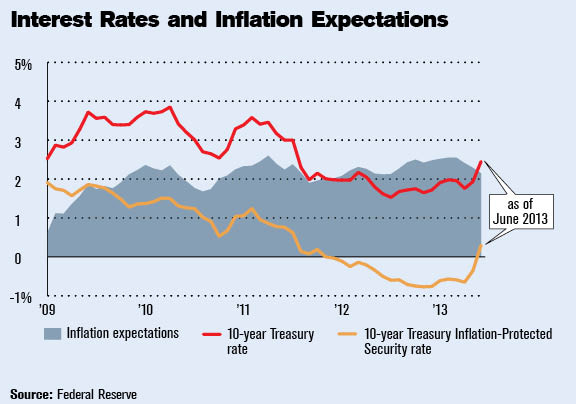 Real interest rates have been in negative territory since December 2011, indicating investors were losing money in the sense that their annual nominal return was less than the annual expected rate of inflation over the next 10 years.

This already has affected the mortgage market. The Mortgage Bankers Association reports that mortgage refinance activity fell 30% from mid-May to mid-June, as the contract rate for the 30-year, fixedrate conforming mortgages rose 39 bp. But purchase mortgage activity should improve as the housing market recovery continues.

John Maynard Keynes wrote that “the rate of interest is the reward for parting with liquidity for a specified period.” Well, that “reward” is moving up, at least for longer periods as the market anticipates the change in Fed monetary policy.