Focus on Members You Already Have

CUs must expand their 'wallet share' of existing members.

Members are just as likely to use credit unions as they are banks for checking and online banking (“Members’ use of banks and CUs for convenience services”).

The 59% of members using credit unions for their checking accounts is up from 51% in 2009. 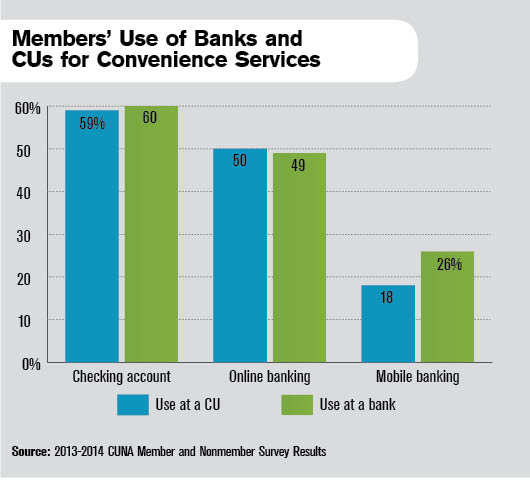 “This represents important wallet share growth opportunities for credit unions,” says Jon Haller, CUNA’s director of corporate and market research, “because the checking account is an important product that determines primary financial institution [PFI] status. As your members’ PFI, there’s a strong likelihood they’ll give you the first shot at meeting their product needs.”

Indeed, it’s almost impossible for a credit union to be a member’s PFI without the checking account relationship, notes Haller. Credit unions should continue to work on increasing checking account penetration among members by promoting low-fee or free checking.

“These options are becoming increasingly scarce as banks increase fees,” Haller says. “Credit unions enjoy a competitive advantage over banks with respect to checking and ATM fees. Members and nonmembers respond very well to that difference once they discover it.”

The problem is, just as many members (49%) use their banks’ online banking services. For both checking and online banking, members are just as likely to use banks as credit unions.

This last figure isn’t surprising, says Haller, given the rapid introduction of mobile offerings and the fact that only 5% of credit unions offered mobile banking just four years ago. Now, however, nearly 75% of members belong to a credit union offering mobile banking.

“I suspect some members and nonmembers mistakenly assume credit unions don’t offer mobile banking,” says Haller. “The challenge before credit unions is to clear up that confusion.”

Credit unions can’t match the large, national banks’ budgets for developing and promoting mobile apps. While the functionality of banks’ and credit unions’ mobile apps might be similar, many credit unions lack the marketing budgets to keep up with large banks’ promotional strategies.

With smaller budgets, credit unions tend to prioritize the technology itself rather than the marketing of it. These mobile apps may be just as robust and user-friendly as banks’ apps, but members and nonmembers are less aware of them and hear fewer persuasive messages about credit union apps.

“Many larger and midsize credit unions are doing an excellent job of developing technology,” says Haller. “Their smaller size, relative to the national and regional banks, can work in their favor—enabling them to be more nimble and respond to shift s in the marketplace more quickly than megabanks. Credit unions’ most significant disadvantage, however, is in terms of their smaller marketing and technology budgets.”