CUs will benefit tremendously if they mobilize quickly to education and attract young adults.

Some nonmembers don’t realize they could join a credit union, while others don’t understand what credit unions are or how they differ from banks. Credit unions have been trying to bridge this awareness gap for decades. 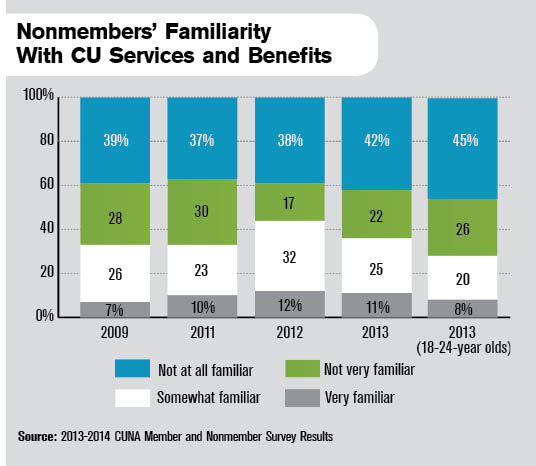 The importance of turning nonmembers into members—especially nonmembers ages 18 to 24—can’t be overstated. This group, known as future borrowers, will soon enter their peak borrowing years (ages 25 to 44).

Credit unions will benefit tremendously if they can mobilize quickly to educate and attract young adults, says Jon Haller, CUNA’s director of corporate and market research.

“You want to be with these members when they start buying homes and cars, opening individual retirement accounts, taking out student loans, and purchasing other financial products and services,” he says.

In nearly all age groups, between 30% and 40% of adults belong to credit unions. But the youngest age group is the exception—only 22% of those ages 18 to 24 belong.

The youngest cohort of nonmembers is the least informed group, so credit unions will have to work even harder to attract their business. Not only do credit unions have to convince this group that rates, fees, and services are better at credit unions than at banks, says Haller, they also have to explain credit unions’ unique, cooperative business model.

“Until these folks know what credit unions are, they won’t be able to make informed decisions about where to conduct their financial business,” he says.

When CUNA conducts informal research on what young people think credit unions are, the responses are “quite remarkable,” Haller says. Some say credit unions are credit bureaus, places to go to pay your taxes, or even labor unions.