CUs Expand Their Arsenal in Tax Fight

League CEO sees effort to maintain CU tax exemption as both a threat and opportunity. 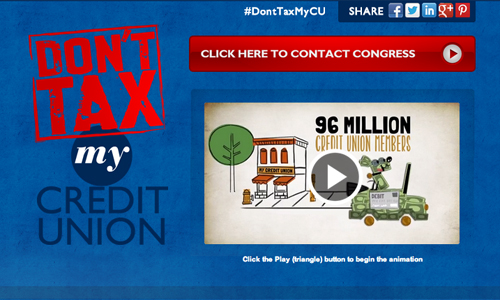 While those practices still have merit, credit unions now have a veritable war chest of tools at their disposal to spread the “Don’t Tax My Credit Union” message.

“CUNA is using videos and apps and its own social media in ways that are much more widely dispersed,” La Pine says. “We have credit unions that are producing and posting videos, and pushing out text messages to their members. Let’s look at our toolbox of technology and social media and see how we can use that. First and foremost, we need to educate credit union employees, board members, and members—probably in that order.”

This evolution of outreach is one reason La Pine sees this tax fight as both a threat and an opportunity. “It’s a threat because if we lose our tax exemption, the credit union system would fundamentally change,” he says. “But it’s an opportunity to collectively rally behind and promote the cooperative spirit and nature of credit unions.

“Coming out of H.R. 1151, we were never stronger as a lobbying force, and never more united as a movement,” La Pine continues. “That issue united us. I see this as being another watershed moment that maybe we need every decade or so: One that gets us back to basics and helps us remember that if we want to succeed, we need to be united and work collectively.”

With that in mind, LSCU may turn its annual cooperative image campaign—a $1.3 million effort featuring television, radio, and billboard ads, plus social media—into an issue campaign highlighting the importance of the credit union tax exemption to consumers.

This campaign also would tell consumers that some parties in Washington want to remove this financial benefit by taxing credit unions—and would urge consumers to express their disapproval to elected officials.

LSCU’s governmental affairs staff has worked closely with legislators from Florida and Alabama, frequently visiting them in Washington to spread the “don’t tax credit unions” message. “We’ll continue to do that every other month—more if necessary—for the rest of the year,” La Pine says.

These efforts will pay dividends in the fall, when he believes the tax issue will come to the forefront.

Legislators have been almost universally steadfast in their support for the credit union tax exemption, La Pine adds. “But I’ve done this long enough to understand how easily and quickly things can change, and we can’t take anything for granted.”

Perhaps the biggest challenge will be maintaining the campaign’s momentum over the months ahead. “We don’t really have something we can rally around at this point—no bill has been introduced that would tax credit unions, or that doesn’t include credit unions as a tax-exempt group,” La Pine says. “So we have to avoid fatigue, because this is a battle that could go on for six, nine, or 12 months. We need to keep people energized over the long haul, so when we really need it we can get the grassroots response.”

Member credit unions are responding positively to the call to action, and are determining the best course of action given their fields of membership, branch footprint, and other factors, La Pine says. “The job of leagues and CUNA is to be a conduit for giving credit unions resources. But ultimately, every credit union needs to decide what it wants to do.”

At Alabama Telco Credit Union in Birmingham, that means educating and involving staff before all else, says Stanton Davis, vice president of marketing for the $600 million asset institution. This includes:

In addition, messaging on lobby television screens, e-mail blasts, newsletter articles, and a website pop-up ad will further educate members. Visits with legislators and a media campaign may also be in the works.

“The time to act is now,” Davis says. “We can’t procrastinate. The more voices we can summon up, the better.”

La Pine agrees. “There may be issues on the state and federal level for which we don’t have unanimous support among credit unions. But all credit unions nationwide know this is a make or break issue. We can’t be complacent.”

Click here for more information and to take action.