The percentage of young adults who own a house has declined dramatically.

The percentage of houses purchased by first-time home buyers has fallen to 29%, compared to historical levels of 40%, according to a report by the Boston College Center for Retirement Research.

Plus, the percentage of young adults who own a house has declined sharply.

One likely culprit: Rising student loan debt. Close to half (43%) of young adults currently have some student loan debt, up from 25% 10 years ago, according to the National Association of Realtors.

The average student loan borrower’s balance has also doubled in the past decade, to more than $20,000 in 2012. 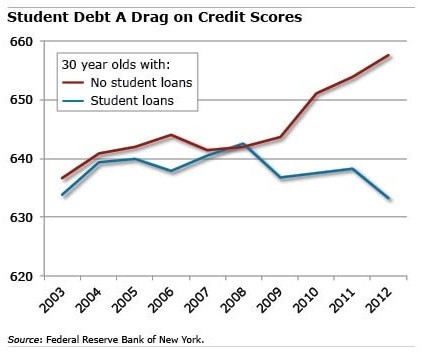 Researchers at the Federal Reserve Bank of New York believe these unprecedented student debt levels may be dampening house purchases by first-time buyers. Student loans cause individuals to do poorly under two of the primary tests by Freddie Mac and Fannie Mae that lenders use to approve standard home loans:

1. Credit score. The average score for 30-year-olds with student loans is 24 points lower than their debt-free friends’ scores.

That difference used to be three points, the Fed researchers said. Eroding credit scores are a fairly recent development.

Other young adults, aware they couldn’t make a house payment, probably don’t even apply for mortgages.

This doesn’t bode well for the nation’s retirement outlook. “One benefit of homeownership is that millions of Americans have, by paying down a mortgage over many years, accumulated savings they can use later in life,” according to the Center for Retirement Research. “With fewer adults today able to buy a house, it could make this country’s retirement outlook that much worse.

“There’s debate about whether buying a house is a good financial move,” the report continues. “But the waning of this coming-of-age ritual is a significant change in behavior for young adults in this country.”