After a long, tough slog through the most challenging economy in recent memory, a second straight year of positive hiring and compensation trends among credit unions reflects cautious optimism in the overall business climate.

Those trends also indicate a strategic emphasis on rewarding and retaining top performers in an increasingly competitive labor market.

“There’s still some uncertainty about the economic recovery and whether or not it’s sustainable for the long term, but these statistics are encouraging,” says Beth Soltis, CUNA’s senior research analyst, about the findings of the 2013-2014 CUNA Staff Salary Report.

In all, the report shows credit unions’ continuing shift from defensive to offensive compensation strategies.

With competition among top employers in its area intensifying, $1.5 billion asset United Federal Credit Union in St. Joseph, Mich., kicked off a three-year plan to become a market leader in terms of compensation.

The credit union developed more competitive compensation strategies, which resulted in an overall 2013 salary budget increase of 5%. That allowed the credit union to elevate high performers who were low in the salary ranges. 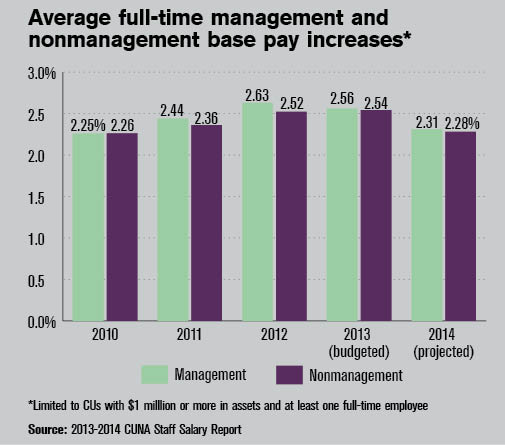 “Learning agility is key,” says Cindy Swigert, chief human resources officer at United Federal and secretary/ treasurer of the CUNA Human Resource/Training & Development Council. “We want people who, when thrust into new roles, can learn on the fly and handle new situations with minimum risk and noise. I’m not saying experience isn’t valuable, but in these days of rapid change, experience alone doesn’t get you there.”

To remain competitive in the battle for top talent, Soltis recommends regularly reviewing and adjusting your salary ranges. This helps your credit union account for the overall increase in hiring and the growing demand for specialized skills, especially among positions requiring information technology and accounting skills.

“I’d encourage credit unions to use the full salary range for both high and low performers,” says Chris Cardwell, principal of Cardwell Consulting, which advises a variety of organizations about compensation and rewards strategies. “It sends a strong message to both groups.”