Member Benefits
Learn more
Learn more about the benefits of membership.
Home » ‘Don’t Tax’ Message Getting Through to Legislators
Directors

‘Don’t Tax’ Message Getting Through to Legislators

CUs find creative ways to educate representatives, public about the value of their tax-exempt status. 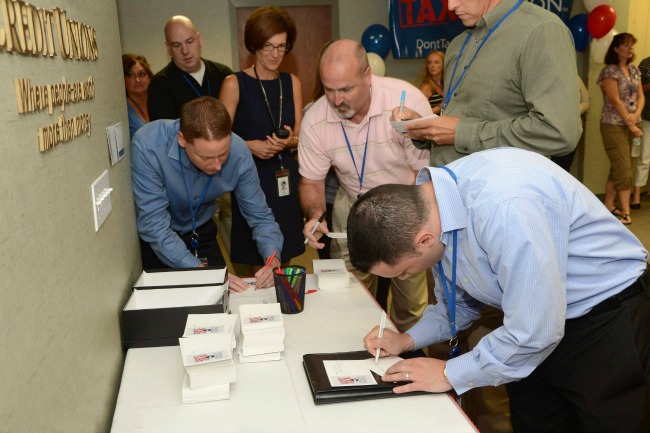 Above: Attendees at a rally outside the CU Association of New York sign 'Don't Tax My CU' postcards that will be sent to New York senators Chuck Schumer and Kirsten Gillibrand, both democrats.

The “Don’t Tax My Credit Union” message is getting through to legislators: U.S. Rep. Bill Pascrell (D-N.J.), a member of the House Ways and Means Committee, pledged to fight to keep legitimate tax exemptions, lauding credit unions for their work and for providing necessary competition to banks, News Now reports.

Pascrell made these comments during a town meeting in Cliffside Park Tuesday night. Among the 200 people in attendance were Tom Quigley, director of marketing for XCEL Federal Credit Union in Secaucus, New Jersey Credit Union League President Greg Michlig and Christian Abeel, the league’s director of government affairs.

“As a credit union member, I am opposed to efforts that would raise taxes on any small business—including credit unions,” Benishek said. “I will continue to work with my colleagues in the House of Representatives to support policies that reduce regulatory burdens and promote employment for all job creators—from credit unions to the small businesses in Northern Michigan that they finance.”

MCUL CEO David Adams said Benishek’s statement demonstrates how credit unions contribute to the economy of Michigan and the nation.

“We asked Congressman Benishek for a statement regarding the credit union tax exempt status and he went one step further,” Adams said. “In addition to expressing clear support for the continued tax status, he reiterated his core values that align with credit unions’ top legislative priorities—namely maintaining and improving the tax and regulatory climate so credit unions can provide more capital and services to the members and businesses that create and provide jobs.”

Last week, for instance, an energized crowd of credit union leaders and members—including representatives from nearly every area credit union, rallied outside the Credit Union Association of New York headquarters in Albany to voice their support for the national Don’t Tax My Credit Union campaign:

NEXT: CUs spread 'Don't Tax' message