The Power of Social Media

CUs and their members create ‘instant advocacy’ in their battle to preserve CUs’ tax status. 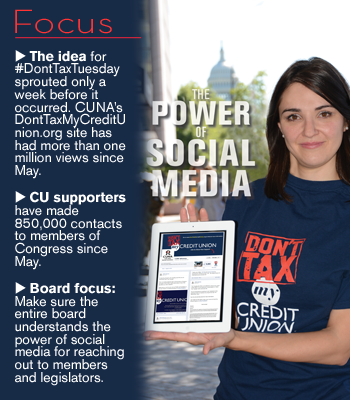 Not long ago, the notion of pulling together a major, nationwide advocacy campaign in just one week would have been laughable. But today, social media enables that type of instant advocacy—as evidenced by CUNA’s “Don’t Tax Tuesday” events of July 23 and Sept. 10.

On those days, CUNA rallied credit union supporters to convey the “Don’t Tax My Credit Union” message to their national legislators via Twitter, Facebook, and Vine, where people can post sixsecond videos.

“We have a great message that’s easily shared through social media,” says Amaia Kirtland, CUNA’s social and digital media manager. “Our members were ready to engage, and picked up the idea quickly. That’s why this event was successful.”

The idea for Don’t Tax Tuesday came about only a week before it happened. Joe Joiner, CUNA’s data, systems, and technology manager, monitors #Don’tTaxMyCU and other hashtags on a daily basis.

On Tuesday, July 16, he spotted a tweet from $60 million asset Lancaster (Pa.) Rose Credit Union that used the #DontTaxMyCU hashtag and then added #DontTaxTuesday, which Joiner thought was catchy.

“A light bulb went on in my head,” he says. “I told the credit union that I thought this was a great idea, and maybe we could use it nationally for a social media blitz day.”

The idea was to get supporters’ messages to congressional members before the July 26 deadline set by the Senate Finance Committee for the submission of tax reform ideas.

“We hadn’t done anything like this in the past,” Joiner says. “So this was a good test to see if our base could build strong momentum through social media.”

These efforts “got the ball rolling,” Joiner says.

Easy to jump in

CUNA provided guidelines and information to get the entire credit union movement on board with Don’t Tax Tuesday. Reminders went out that messages should be clear and concise to be effective.

“We made sure people had representatives’ Twitter handles, that they used the #DontTaxMyCU hashtag so they could be part of the conversation, and that they included their followers when they were sharing,” says Kirtland.

CUNA also produced sample tweets and Facebook posts, and assembled data (on national and state levels) about credit unions’ financial benefit to consumers. That gave supporters precise facts and figures to make their messages more powerful and convincing to legislators.

SIDEBAR:
Leagues and CUs Get in the Game

People in Maryland, for example, could tweet or post, “Taxing credit unions would wipe out $102 million in benefits per year for 1.6 million Maryland members.”

As for the national impact, CUNA pointed out (via its @CUNAadvocacy account) that “$0.5 billion in new taxes wipes out more than $5 billion in benefits to credit union members and communities.”

“The information CUNA put together was amazing,” says Jenn Cloud, social media specialist at $724 million asset Vantage Credit Union, Bridgeton, Mo. “It made a video that was short, simple, and beautiful. The information was easy for us to share with our members. And it was helpful to have when we were asking everybody to hit hard” on social media with the “Don’t Tax” message.

At day’s end, however, the Independent Community Bankers of America website posted a letter sent to members of Congress arguing against credit unions’ income tax exemption.

The following Monday, the American Bankers Association, as part of its “It’s Time to Pay” campaign, began pushing a new hashtag, #ItsTime2Pay.

“The biggest difference between the campaigns is that ours is positive,” Joiner says. “We’re showing how credit unions benefit individuals and communities; their message is negative and is only about attacking credit unions.”

“The Sept. 10 Don’t Tax Tuesday campaign accomplished our goal of welcoming Congress back to Washington with the resounding message of ‘Don’t Tax My Credit Union!’” says CUNA President/CEO Bill Cheney.

That initiative resulted in more than 5,000 tweets and 600 Facebook posts, with more than 4,800 specifically aimed at the Twitter accounts of members of Congress—more than double the results of the first Don’t Tax Tuesday campaign.

More than one million Twitter users were potentially exposed to the Don’t Tax My Credit Union campaign on Sept. 10, bringing the campaign total to more than three million social media users. CUNA’s DontTaxMy CreditUnion.org site had more than 69,000 page views on Sept. 10—nearly seven times its daily average. And 70% of the nearly 23,000 unique visitors were first-time visitors to the site. The site has had more than one million visits since May.

Leagues are launching additional campaigns of their own. The Credit Union Association of New York, for instance, declared the week of August 19 “Don’t Tax Week,” and encouraged activism through multiple channels, including social media (“Leagues and CUs get in the game,” p. 26).

“One of the biggest lessons we learned is that credit unions and social media are a natural fit,” says Paul Gentile, CUNA’s executive vice president of strategic communications and engagement.

“There are few industries that can go out to their customer base—in our case our members—and rally the type of support we can,” he says. “Social media will be a good part of our advocacy efforts for years to come.