Member Benefits
Learn more
Learn more about the benefits of membership.
Home » How to Get More Core Competition
Technology

How to Get More Core Competition

Consolidation among core processors isn’t ideal, but neither are the alternatives. 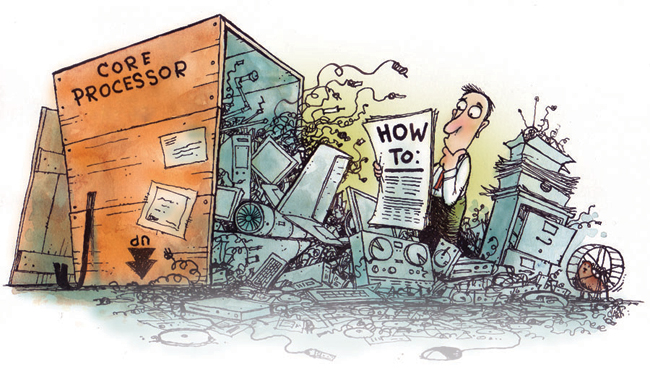 The cost of an in-house core system is extravagant. When you tally up the bill for hardware, software, and the people to run everything, it’s enough to make Warren Buffet cry.

As credit unions grow, technology costs grow even faster. Blame this on the inordinate complexity of combining disparate systems—an unfortunate fact of life. A core systems salesperson once told me, “Size brings complexity, complexity brings cost, and cost brings salespeople on commission.” (This salesperson eventually was dismissed, probably for being too honest.)

Consolidation among core providers exacerbates the problem. Only four providers—Fiserv, Symitar, FIS, and Harland—control more than 90% of the market among credit unions with more than $250 million in assets. This lack of competition isn’t a good thing for credit unions, especially those that rely on innovation to remain competitive.

We need more competition, but how do we get it?

I have an idea. What would happen if the top companies in the U.S. could be lured into building core systems for us? It might look something like this:

►Microsoft : After building something that worked and was affordable (XP), it forcibly upgrades everyone to its new Vista system, which runs twice as slow and includes an annoying nag feature. After many complaints, it develops a better system but it requires new hardware. And so the cycle continues.

►Verizon: Contracts now run 10,000 pages and are incomprehensible. The system generally works, unless it doesn’t. If it doesn’t work, Verizon tells you to find “a better place” and try it again. New models roll out continually, each much better than the last. But you can’t upgrade until two years from when you signed the contract.

►Costco: Low-cost and easy to use, it’s a wonderful system but with a tendency to occasionally multiply things by 20, 30, or more. Features beloved one minute mysteriously disappear the next, showing up months later in a completely different part of the system.

►United Airlines: In every release, more and more is packed into a space that seems smaller and smaller. Most projects arrive late and with little explanation. Unexpected fees are prolific and mysterious, ranging from “fuel” fees for telephone support to “baggage” fees for complaining about the lack of human support.

►Walmart: While the soft ware is cheap, you question the prudence of its strategy of outsourcing soft ware development to 8-year-old children in a third-world country. You’d complain but the phone is being answered by a very old greeter who creeps you out.

►Facebook: Innovation is everywhere, but the regulators are up in arms when each transaction is inexplicably shared with everyone else. Worse, security is a third-party option.

►Boeing: The product arrives in a huge box. Upon opening it, you’re amazed at the level of detailed craft smanship and engineering. Once plugged in, it runs flawlessly before catching fire because a $1.99 AA battery fails.

►IKEA: Your system comes in several boxes with installation instructions. Aft er you put it all together, you have extra parts you realize aren’t extra. While the system is functional and affordable, aft er a bit of time you find it’s a bit more wobbly and unstable than the demo you saw at the store.

►Disney: The system works amazingly well—almost magically. Of course, at that price, it should. Everything you do seems to cost four times as much as you’d imagine. The nomenclature is a bit odd, as you find yourself with Lending Mountain, Accounting Castle, and Teller Land. At least everyone’s happy.

OK, so maybe the current core providers might be just fine. After all, things are specialized….