Rising costs for software and third-party services squeeze CUs’ IT budgets.

Nassau Financial Federal strongly considered offering instant-issue credit and debit cards as part of its technology overhaul. Although Reh gives high marks to the service, he and his team chose to pass on it because improving members’ online experience and capabilities delivered higher value.

“Each credit union should decide for itself what’s best for its members and potential members to remain competitive, rather than simply follow some industry trend,” Reh says.

That frequently translates to a substantial investment. First Tech Federal Credit Union, a $5.8 billion asset institution based in Oregon and California, will introduce a multichannel initiative next year that CEO Greg Mitchell says “should cause First Tech to be viewed as an industry leader.”

The initiative includes a fully integrated digital sales platform, a CRM solution that creates consistency in processes and member experiences across state lines, and a business intelligence application that allows First Tech Federal to deliver better products to members. 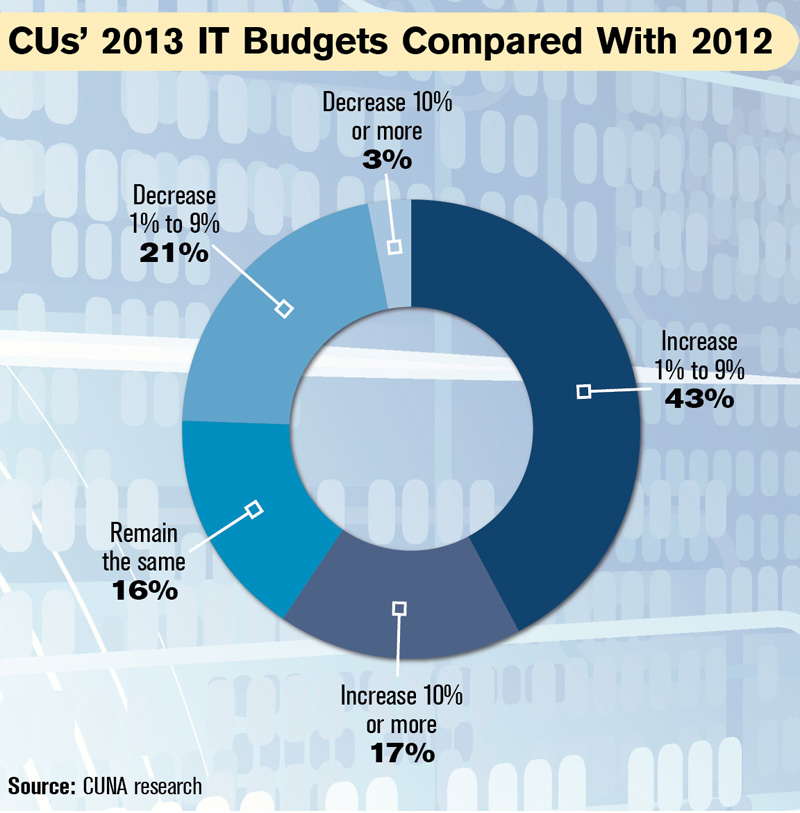 “Failure to maintain relevancy through the development of better products, strong distribution channels and frictionless processes will limit growth of new members and drive existing members into the arms of evolving players in the payment space," Mitchell says.  "We believe that credit unions which are able to combine a trusting relationship and relevant banking and payments experiences will remain well-positioned for growth and high levels of member satisfaction.”

To maintain its competitive edge, Brewery Credit Union offers online and mobile services to its largely low- and middle-income membership via “It’s Me 247”—a solution from CU*Answers, the credit union’s core processor.

After bringing its core processing in-house in 2010, Reliant Federal also started handling its own credit and debit cards and card conversions. Last year, the credit union invested $30,000 in Voice over Internet Protocol (VoIP) for its entire operation.

Since then, Smith has focused on improving staff’s ability to serve members. Reliant Federal streamlined infrastructure by removing inefficiencies from the network and significantly upgraded external and internal Ethernet bandwidth.

“Rather than focusing on new bells and whistles, we’re trying to build a stable platform,” Smith says. Reliant Federal maintains that platform by outsourcing its network support and help desk. Smith decided to take that direction in 2011 aft er his department manager left ; he was concerned that retention would continue to be an issue, and opted to shift that burden to a third party.

Given these constraints, Smith cautions about the hidden costs of any service alteration. “Even if it’s something as simple as rewards checking, there’s a lot of back-office IT work that needs to be done,” he says.

“Low-cost or even no-cost system refinements can have a big effect on members or your operations, especially if they address something you’re sorely lacking,” Reh says.

Getting maximum value from existing technologies and vendor relationships was the top technology concern for 2013 among 69% of senior executives, according to a survey by Abound Resources.

Reh says credit unions can avoid buyer’s remorse by being cautious and by exercising due diligence. Nassau Financial Federal’s policy prohibits the credit union from implementing any system that’s still in a pilot stage or not in active use at another institution. The credit union typically considers at least three vendors for any new product or service.

Nassau Financial Federal reviewed eight core processors during its search. It also asked for input from everyone on its management team and other employees during the testing phase.

Before making any major investment in technology, Johnson recommends asking:

Despite pressure to control costs and provide bang for every buck, credit unions are better positioned than big banks to move forward with new technology because they’re more nimble and generally aren’t burdened with expensive and unwieldy legacy systems, Reh says.

“Credit unions shouldn’t strive to equal banks— they should strive to eclipse them,” he says.

To that end, Nassau Financial Federal plans to significantly improve its existing CRM systems in 2014— an investment Reh regards as essential to the credit union’s growth plans.

“Having improvements that bring online services to the next level, data analytics that target new technology and services to the right people, and increased returns and reduced costs make the increased spending on IT certainly justifiable,” he says.