But CUs should investigate these strategies while on watch for a truly disruptive system. 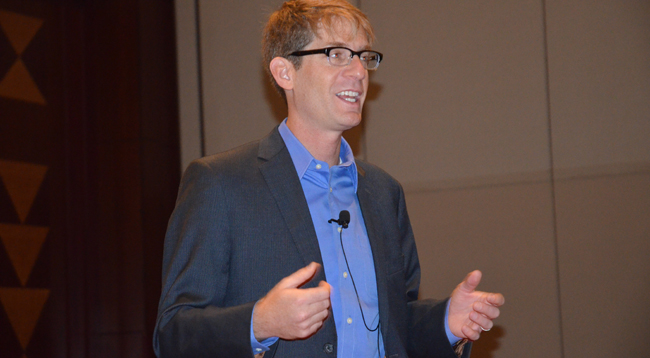 Not even a fortune teller can forecast exactly which revolutionary new payment model might supplant good ol’ 1960s era card swipe technology, but George Hofheimer says the crystal ball will deliver the answer in a riddle:

Clearly, the barrier to acceptance is steep, George Hofheimer—chief researcher and innovator at Filene Research Institute—told CUNA Community Credit Union & Growth Conference attendees at a breakout session on the future of payments.

Consider the hand-wringing over the 2015 liability deadlines for conversion to EuroPay, MasterCard, and Visa (EMV) chip technology. EMV doesn’t even fundamentally upset the apple cart of swipe technology, which remains “absolutely dominant,” and its debit and interchange fees upon which many credit unions rely.

Essentially, the new payment models “haven’t taken hold because the technology we have today is good enough,” Hofheimer summarized. “Consumers like it, and merchants for the most part like it, despite the fees.”

Credit unions closely monitor developments in the payment sector but generally concede that because they pale in size to megabanks they’re better positioned as fast followers than first adopters, according to Hofheimer. Two-thirds say they’ll actively consider new payment providers in the next 24 months.

Investigate what systems megabanks use, since they’re industry leaders, says Hofheimer, and don’t base your decision on consumer polls.

“Consumers are extremely fickle,” Hofheimer said. “When you look at consumer data on how they want to pay in the future, what they say and do are two very different things. And generally, the answer to which system they prefer is, ‘I really don’t care. I just want to buy stuff.’”

Capitalize on physical assets. Consumers aren’t comfortable with managing their financial lives in the way they’re comfortable bypassing other old standbys like the record store or bookstore. They always need a safety valve, and that’s credit unions.

Leverage payments data. Take stock of the information you have in hand, make sense of it, and use it to deepen relationships with customers and merchants.

Focus on commerce. Go beyond payments and attempt to develop partnerships in your community. Explain to the local gas station owner (using data you’ve mined from your credit union) that your members spend $3 million a year there, and ask to forge a relationship.

Experiment with small bets. Invest in a start-up or fledgling payments technology firm with an amount of money that won’t break you.

Collaborate with credit unions and vendors. This could be a coalescing moment for credit unions. They might be too small to solve the situation individually but could band together to find a solution – similar to how banks forged together on Visa to advance past the cash-and-check era. “In the worst case scenario—if interchange went away—wouldn’t you wish collaboration would’ve happened 10 years earlier?” Hofheimer asked.