Credit union auto lenders likely will look back at 2013 and proclaim, “Not bad!”

Bob Child, chief of staff at CU Direct Corp., believes 2013 will have overall loan growth of roughly 5%, fueled mostly by new-auto loans. Through June, both new- and used-auto loan growth has been a robust 11.9% and 9.2%, respectively, according to CUNA’s economics and statistics department (“A favorable forecast for CU auto lending,” p. 59).

“We expect 2014 to be good, too, because so many cars on the road are aging and their owners have to replace them,” he says. “People postponed vehicle purchases because of the recession, but many cars are reaching the point of replacement.”

Plus, automakers introduced more new models in 2013 than they did over the previous three years, Child says, and the nation’s used-car inventory is shrinking.

Joe Miller, director of customer service at AutoIMS, expects the used-car market to remain strong. “The auction industry has been anticipating a fairly precipitous drop in used-car prices after a long period of lower supply and high demand that seems like it should be coming to an end. Yet wholesale prices haven’t dropped much. Demand seems relatively high in both the new and used space.”

Another factor Child cites for the general auto lending uptick is that credit unions have loosened their belts a bit regarding credit risk. “You’re seeing some credit unions move to nonprime loans but not to subprime.”

Credit unions remain a conservative lot by and large, he adds, and their auto loan delinquency rates bear this out: 0.38% for new-auto loans and 0.64% for used-auto loans as of June 2013, according to CUNA’s economics and statistics department. 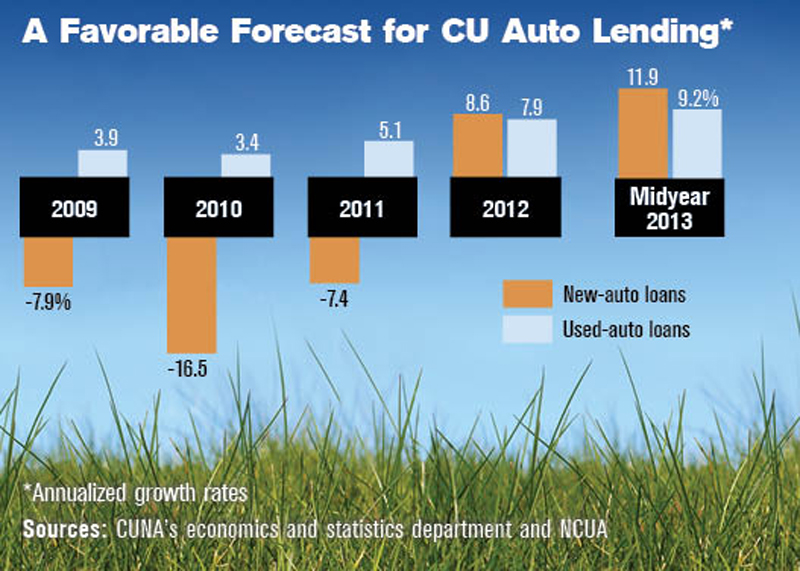 While this is good on one hand, Child says, “on the other it can drive members into other lenders’ arms. The most competitive market now is with people who have ultra-high credit scores. This market has razor- thin margins.”

While some fear rising interest rates might harm credit unions’ auto lending efforts, Vehko doesn’t believe this will happen. “As not-for- profit entities, credit unions are in a position to charge slightly lower rates, strengthening their presence in the market,” Vehko says.

“Lending to credit-challenged customers is just part of that business,” Miller adds, “and some credit unions will participate in the sub- prime market to boost revenue. We anticipate credit union auto lending to increase in the coming years as the nation’s aging fleet of vehicles turns over at a higher rate.”

How vendors help CUs

Credit unions can boost their confidence in loan decisions when they have the tools to recover their assets when members default, Miller says. “Our core business is inventory management software that enables repossessions and the disposal of vehicles. It allows clients to assign a vehicle for repossession to a vendor of their choice; track and manage that process; measure performance; and then assign, track, and manage the process of selling the vehicle at auction.”

Another valuable tool is the auto loan preapproval, Child says. Most consumers don’t think about vehicle financing until they sit down with a dealer—which greatly reduces credit unions’ chances of getting the loan.

Buying, Borrowing Seen as One Event

Loan preapprovals help credit unions avoid this scenario. “Typically the credit union might send a member an email or certificate that says, ‘You’ve been preapproved for up to $35,000 at such-and-such a rate,’” Child says. “When you consider that only 25% of members who plan to buy a new car think about getting a preapproval from their credit union, you can see why this is such a necessary tactic. You have to be at the top of members’ minds before the purchase because car buying is such an emotional experience. Four times out of five consumers want to leave the lot driving a new car.”

According to CU Direct research, preapprovals work: 71% of used-car buyers and 81% of new-car buyers who have a preapproval will finance through their credit unions—even if the dealer offers a better rate.

“That’s not to say credit unions will be able to beat an unbeatable deal,” Child says, “such as 0% for a three-year term or a 1% rate for a four-year term.”

DILLS generates 39 real-time reports to help lenders stay cur- rent and in control of the lending process. “The goal is to establish better relationships with dealers and increase loan approvals,” he says.

Credit unions can outsource the use of DILLS if they lack sufficient staff resources, Vehko adds, while still using their own lending criteria.

Credit unions that want to out- source some of their auto lending can use a company such as the National Auto Loan Network (NALN). Clients give the company a desired credit score range for borrowers, options for collateral, and an amount to finance each month, and NALN will go out and find borrowers within the credit union’s field of membership who meet the criteria, says Eddie Nevarez, vice president of business development.

“We’ll ask the credit union, ‘what’s your appetite for loans?’” he says. “Some credit unions will go as high as $1.5 million per month, which is about 80 loans.”

Credit unions use their own lending criteria, and have the first right to refuse loans. Ninety-nine percent of loans are refinancings. “We go to folks who are misplaced in their loans,” says Nevarez, a former credit union lender. “They have credit scores of 680 or higher, but an interest rate that often doesn’t reflect that score. So we’re asking borrowers to pay less than what they’re currently paying, often with fewer months on the term.”

NALN pays for all of the marketing and charges clients 1.5% of the amount financed on funded loans only.

“Be fully committed,” he continues. “An indirect auto lending pro- gram is not a part-time endeavor. Be competitive with rates and develop a niche. If big banks are going after new-auto loans, credit unions can occupy the used-car niche.”

It’s also important to prepare for the inevitability that some loans will go south. “One way to assess risk is to understand the value of your under-written assets, especially when compared to the amount of the loan on each vehicle,” says Miller. “Fortunately, when it comes time to repossess, credit unions have the highest instance of ‘voluntary repos,’ where members willingly hand over the keys and the car, oftentimes drop- ping them off in the credit union parking lot.”

This, he says, can save credit unions considerable money. “But it’s still important to have a well-vetted, licensed, and bonded repossession vendor to help you comply with all local and national regulations.”

Another key is the use of mobile services, Child says. “Mobile is very important in attracting and serving the car buyer market, especially now that Gen Yers are influencing 50% of all new-car purchases, either through their own buys or in recommendations they make to their parents.”

As tablets and other mobile devices expand their presence at a prodigious rate, the ability to allow members to initiate and track auto loans via mobile becomes one more tool credit unions can use to cement their bond with members.