Freedom First FCU is transforming a community—one story at a time. 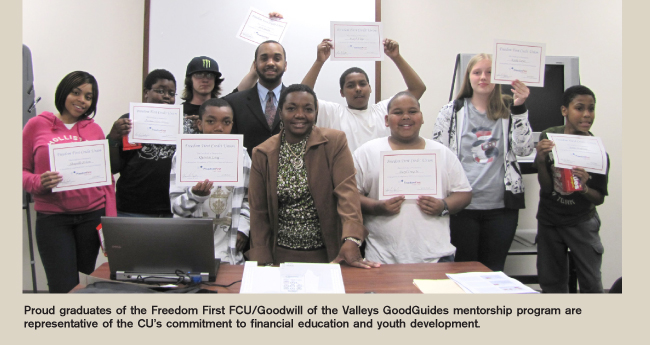 Credit union staff work with members and potential members to learn more about their past problems and to discover their future goals and ambitions. The credit union takes a holistic approach—not just focusing on one-off products—to help people reach their goals.

“We kind of become case workers for these folks,” Prosser says. “When we work with a person, the answer is very rarely ‘no.’ Instead, the answer might be: ‘Not today, but this is what you will need to do in the next few months, and if you can show us you’re on the right path, then we’ll help you and grant that request.’ ”

These aren’t handouts, Prosser stresses. Users are asked to work for it, which sometimes means participating in the credit union’s financial education programs or meeting some other requirements.

“If they’re still willing to commit to it, we know they’re engaged,” Prosser says. “The person who’s really willing to fight for it is the person who will be successful.”

Prosser should know—the credit union collects a lot of data on outcomes. The numbers are studied, analyzed, and compiled for the board of directors.

“We look at each product to determine if it’s sustainable. It’s important to our board to know we’re doing the right thing and being financially responsible. It’s one of our core goals to remain financially safe and sound,” Prosser says.

While some of the products for low-income members make a small contribution to Freedom First Federal’s bottom line, they make a big impact in the community. Access to reliable transportation through the credit union’s Responsible Rides program can help a member find a better day-care solution, or earn a higher wage by working the night shift without having to rely on public transportation.

Prosser says his staff have become emotionally invested in the work they do.

“My folks are jazzed up by the fact they’re making a strong impact on people’s lives,” Prosser says. “We have staff meetings every two weeks and everyone is expected to bring a story of how they’ve been able to make a difference in a member’s life.”

Freedom First Federal is currently expanding into one of Roanoke’s most economically challenged neighborhoods. The area is consumed by poverty, joblessness, and crime. It has a palpable lack of medical clinics, gas stations, and grocery stores.

But in April, the credit union broke ground on a new branch as part of a local revitalization project.

“We want to restore dignity to this neighborhood,” says Prosser. The branch—the first in the area—will extend services and educational programs to combat nearby payday lenders, pawn shops, and rent-to-own companies.

The project, made possible by an $850,000 CDFI Fund grant from the Treasury Department, will also include a community center, a future community kitchen, and a permanent home for a local farmers’ market.

“Roanoke is fortunate to have a financial institution like Freedom First invest in an underserved community,” says Chris Morrill, Roanoke city manager. “I commend them for taking the lead in this important initiative that can make a real difference in people’s lives.”

Freedom First Federal wouldn’t be able to serve its primarily low-income members and communities without the help of community partners. That includes big employers, nonprofits, faith-based groups, local government, and even for-profits.

The credit union also provides and promotes financial education, works to improve housing with weatherization and accessibility projects, and works to move the unbanked and underbanked into the financial mainstream with community partners that include local government, the United Way, Big Brothers Big Sisters, Goodwill, and Habitat for Humanity.

Freedom First Federal is a prime example of what is possible for credit union’s with a community development mission, says the Federation’s DeFilippi.

“Freedom First is proving that it’s a great investment. They’re like the local media darlings now, because everything they do has a social and financial impact,” DeFilippi says. “This is a unique institution that no one else in that community, not even Bank of America, could compete with.”

“Our tagline is ‘Where people bank for good,’” says Prosser. “Our hope is that people will want to bank with the credit union, because they know that by banking with us they’ll be helping their neighbors with their struggles.”