A Closer Look at Payday Loans

Never underestimate the tenacity of a consumer who wants something. 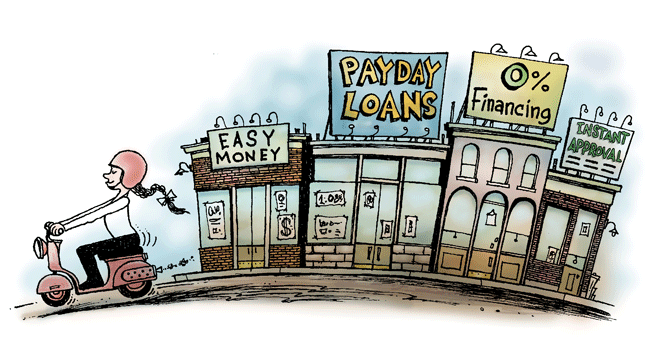 Yes, they’re horrible, but research shows they can meet a need.

The other day I found out that a close family member—whose name I will not disclose, and refer to only as “my daughter”—took out a payday loan with a local credit union.

I told her, in a clear and professional manner, this was a poor financial decision, which made her storm off in a huff. I believe the phrase I used was, “as dumb as inviting Miley Cyrus to your dance recital.” This, in hindsight, might not have been received in the spirit I intended.

After things calmed down, I realized my biggest surprise was that a credit union would be offering payday loans. After all, we all know that payday lending is a practice best left to those void of morals, ethics, or civility.

My daughter actually had a legitimate borrowing need. She needed to get her moped fixed because it’s her only source of transportation. Temporarily out of work due to a school break, she borrowed $200 and paid it back within 10 days.

According to my calculator, the annual percentage rate (APR) on the loan was about 438%. A loan officer might say this is “a tad above what we can get for an indirect auto loan.”

Other options presented much better rates, but she knew the loan would be granted quickly and with little hassle. “Why would I take the chance of being denied?” she asked. In her mind, the APR wasn’t the most important consideration. She recognized a problem, figured out a solution, and executed the process. As she zipped off on her moped, I found it difficult to argue with the results.

So, is payday lending the evil most of us say it is?

Consider, though, the ramifications of an outright ban. Some say this will stop the abuse and ultimately make consumers financially smarter. But as author and journalist George Leef wrote for the Foundation for Economic Education, “You can’t make people better off by taking options away from them.”

A Federal Reserve Bank of New York research paper analyzed the effects of a payday lending ban in North Carolina and Georgia. The researchers concluded consumers were actually in worse financial shape after the ban due to higher bankruptcy rates, more bounced checks, and more

What about these free-market options? Let’s say a consumer pays his $100 cell phone bill when he’s a little short of funds, and his check bounces. The combination of nonsufficient funds and merchant fees could result in an APR exceeding 1,000%, which leaves that ugly, despicable payday loan the deal of the day.

Meanwhile, back at the Collins household, I took my daughter aside and made this request: “The next time you get yourself in a pickle, ask me first. My rates are much lower.”

She thought for a moment before responding: “Dad, it’s not your rate; it’s your terms and conditions.”