These leaders have helped their member CUs stay true to their original mission.

When Steve Fowler, Jim McCormack, and Dan Egan joined the credit union movement during the 1970s and 1980s, there were more than 21,000 credit unions, NCUA was a new federal agency, and credit unions had just been granted the authority to offer share drafts and mortgages.

Today, there are far fewer credit unions (about 6,900) but far more members (about 97 million) and an impressive $1 trillion in assets—thanks in part to the efforts of these longtime league CEOs, who will retire at the end of this year.

While they took disparate paths to their ultimate destinations, they were singular in their mission to help credit unions expand their products and services, achieve legislative and regulatory aims, and bring about exponential growth—all for consumers’ benefit.

One constant in Dan Egan’s career has been justice, first as an assistant district attorney and then as legal counsel for the Massachusetts Police Chiefs Association.

When a law enforcement friend joined CUNA Mutual Group, he told Egan how much he enjoyed working with credit union people. So when an opening for general counsel at the Massachusetts Credit Union Association presented itself in 1981, Egan applied for the job and got it.

Less than three years later, the league’s president died of a heart attack—and the board named Egan his successor. He’s been helping member credit unions provide economic justice for their members ever since.

“At the time, credit unions were declining in numbers and few were being formed,” says Egan, who also leads the New Hampshire Credit Union League and the Credit Union Association of Rhode Island through a management agreement. “I thought the more we could centralize resources, the better we would be in the long run.”

His multifold accomplishments over the years bear this out. They include:

Egan admits the act wasn’t perfect because Congress had to adopt the Senate version of the bill to ensure passage to obtain the president’s signature before the end of the legislative session. “But many issues that were proposed that would have been detrimental to credit unions were omitted from the final bill,” he says. 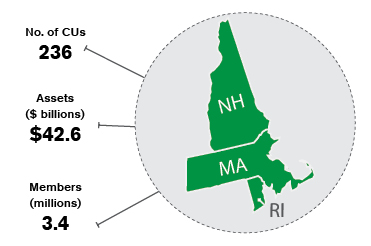 Looking ahead, Egan sees a great future for the credit union movement, but one that will not lack significant challenges. “As credit unions continue to merge, there’s bound to be a greater demand for efficiency on the CUNA/league system. It’s gratifying to see the evolution of the management agreement concept we implemented in 1985 [lead] to a merger of leagues in the Pacific Northwest, the Southeast, and the Mountain states.”

One challenge demanding quick resolution is the need for one national trade association to represent the interests of all credit unions, he says. “The division of scarce resources and potentially conflicting messages to Congress and federal regulators is detrimental to the best interests of credit unions and only helps the bankers in their efforts to lobby against us.”

He says the best characteristics of credit unions are embodied in the many people who run credit unions and related organizations each day. “The thing I will miss most aft er retiring will be the daily interactions with the many individuals who have become my close friends in credit unions, leagues, CUNA, and CUNA Mutual Group over the years.

“I’ve benefited from great advice and counsel from many exceptional people in the credit union community. I will cherish the memories of those great people for the rest of my life.”

NEXT: ‘Not my thing’