The state of the CU movement is vastly improved, but not all CUs are seeing the same results.

In the aggregate, operating results today look nearly as good as pre-recession levels. But the journey back to “normal” has been painfully slow and uneven. Not all credit unions are experiencing the same recovery. The differences become apparent when you take a closer look at credit unions by location, field of membership, and, in particular, asset size. 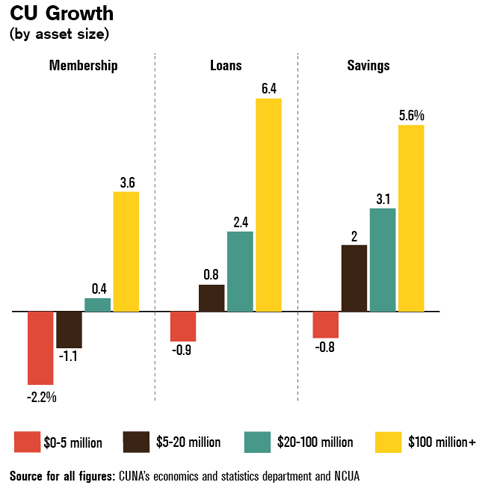 Those banker misdeeds, combined with more recent anti-consumer pricing schemes, spawned a consumer backlash that included Bank Transfer Day and other follow-up activities. Credit unions were the primary beneficiaries of all this.

Member-owned credit unions didn’t contribute to the bubble, and during the worst of the recession, credit unions received positive reviews for their pro-consumer lending practices, willingness to lend, and readiness to go the extra mile to meet members’ needs.

But this rising tide isn’t lifting all ships. The smallest credit unions—those with less than $5 million in assets—experienced a 2.2% decline in membership for the year ending June 2013.

Only credit unions with more than $100 million in assets posted significant membership gains during that period.

SIDEBAR:
The Beauty of Being Small

It should be noted that these asset categories are roughly equal to quartiles in the credit union movement:

An inability to attract and retain members is a source of deep concern. Membership growth is a key measure of credit union relevance in the marketplace. It’s also a measure of members’ economic health, both in credit unions’ sponsor groups and in local communities.

Declining relevance is especially difficult to battle because consumers are placing heavier demands on financial service providers. The services consumers want are increasingly complex and expensive to build (or acquire), maintain, and keep in compliance.

Disparities in membership growth between large and small credit unions can be seen in other areas as well.