The Experts Likely Overlooked These #10TechTrends

The future's very 'cloudy' but it appears Google Glass and MyFI are here to stay. 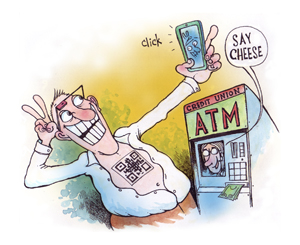 Here are some hot technology trends that many tech observers might have overlooked:

1. Twitter. Thought it was deader than Lindsay Lohan’s acting career? Think again. A typical day for Twitter features more than 500 million tweets. Twitter uses “hashtags,” which are basically key words preceded with the # symbol (example: #BranchingOutRules). While social media experts recommend only two hashtags per message, this is just a recommendation. It’s like driving in the fast lane on the freeway—if they really intended 60 mph to be the maximum, wouldn’t they put it in black and white? #AtLeastIamNotMayorFord

2. Google Glass. Think this is just for low-lifes who want to take pictures of others inconspicuously or for slackers who want to browse the Internet rather than pay attention during a business meeting? OK, you might be right, but the glasses are also trendy and attractive in a nerdy kinda of way. #NotJust4Nerds

3. Other wearables. From the Nike FuelBand to the Samsung Galaxy watch, things we wear will take on new abilities and connect to smartphones. But what really looks interesting are “smart tats.” Not only could these identify the wearer, they spare you the awkward dilemma of what to do with your “I Luv Suzi” tattoo after you break up. Instead, you could simply link your smart tat bar code or QR code to your match.com profile. #WhoWasThatTat

4. Snapchat. This app has become famous for letting people take and share questionable pictures, only to have them quickly disappear. This is the tip of the questionable content iceberg. Consider the business potential—JPMorgan Chase CEO Jamie Dimon could send his apology to the Justice Department, and then claim it never happened seconds later! #TooBigToFail

5. Instagram vs Vine. OK, they both let people post videos quickly and effortlessly, but the difference between these two offerings is only nine seconds. That’s because Vine limits you to six seconds while Instagram goes all out and gives you a full 15 seconds to tell your life’s story. This is yet another indication of how short our attention spans have become. #Squirrel!

6. The Cloud. It seems like every vendor phone call must mention “The Cloud.” It’s either stored “in the cloud,” runs “in the cloud,” or comes with a price that is “in the cloud.” This isn’t going away, if for no other reason than vendors get to upsell products that don’t exist in the real world. #CongressOrCloud

7. Selfies rule. The days of hiring a professional photographer at $100 per hour are over. All you need today is a smartphone with a reasonable camera and two arms. If you think this is limited to 16-yearolds with self-esteem issues, think again. Several world leaders recently made news by taking “selfies,” which proves self-esteem issues exist in unlikely places. #SelfiesRule

8. Virtual teller. Like a politician during a crisis, a virtual teller seems to actually be there, but really isn’t. Current technology enables staff to provide service remotely. But as things progress, it’s easy to see that these tellers become completely virtual. Think of Apple’s Siri—the only difference is that virtual tellers actually work. #SiriCU

9. “myFI.” This makes me think of the quote: “Always remember that you’re absolutely unique, just like everyone else.” Well, so are your members. The days of one-stop shopping ended years ago. Today’s member is happy to maintain multiple relationships—not unlike many college students. #IamAvailable

10. Binging. This is more of a personal behavior enabled by technology, but the fact remains Gen Yers do not wait for their favorite TV shows each week. Instead, they’ll set aside an entire night, get together with their friends, and watch an entire season (or four) in one session. This is how they want to do their financial chores as well—one day of pain. #NoPainAllGain

So, there are the 10 most notable tech trends for 2014. Before you say, “Some of these are really, really unlikely,” I’d say they’re all more likely than the mayor of Toronto turning out to be a crack smoker. #Snap