Member Benefits
Learn more
Learn more about the benefits of membership.
Home » Prepare for the End of Gridlock
Management

Prepare for the End of Gridlock

The paralysis that has gripped Washington will end eventually. CUs must be ready when it does. 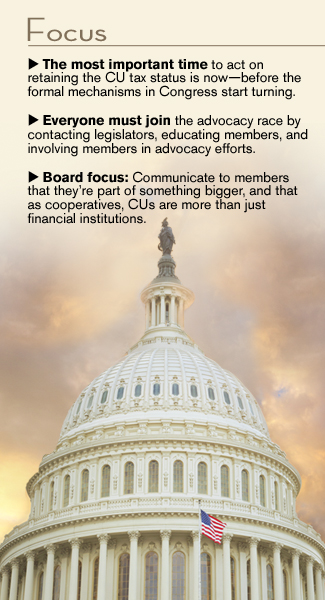 What’s the definition of insanity? Doing the same thing over and over again but expecting different results. Speaking of Congress…

It doesn’t matter if it’s the Republican-controlled House of Representatives passing legislation to repeal Obamacare more than 40 times in three years or if it’s the Democrat-controlled Senate using procedural tactics to prevent amendments from being offered on legislation. Many activities take place on Capitol Hill repeatedly that lead not to different results but to legislative gridlock.

For those responsible for advancing a legislative agenda, the gridlock is frustrating. For those who look at what is happening from outside the Beltway, it must surely look like insanity.

Gridlock in Washington has contributed to a government shutdown and fiscal cliffs, slowed recovery from the Great Recession, and given Congress the lowest approval rating in history. In fact, for a time in 2013, former National Security Agency contractor Edward Snowden, who continues to disclose classified documents to the media, had a higher public approval rating than Congress.

But this level of disapproval is unsustainable, which is why some observers expect Congress will soon find ways to break the gridlock and return to “normal.” The approval of a two-year budget deal and an omnibus appropriations bill are steps in the right direction.

The key for advocacy groups like credit unions is to be prepared for the inevitable breakthrough. The first step in being prepared is understanding the dynamics of the challenge. And in terms of advocacy, it’s important to remember that this is a marathon, not a sprint.

That which Congress does quickly it rarely does well. This is one reason Congress rarely does anything quickly, even in normal times. Major reform, such as what Congress is considering with the tax code, should take a long time to develop because the consequences of getting it wrong are severe.

That doesn’t mean, however, that those advocating for or potentially affected by reforms should wait until Congress is ready to act before they engage. Waiting to engage with Congress until it’s ready to vote on a matter is an almost certain way to come out on the losing end.

This is why credit unions must stay engaged in the process the entire time—an advocacy marathon, so to speak.

As we look at the threats or opportunities credit unions might face on Capitol Hill, we have very low expectations in terms of bills actually becoming law. But make no mistake: The work Congress does on matters such as tax reform and housing finance reform this year will significantly influence the outcome of these issues in the next Congress.

Some credit unions are already running in the advocacy marathon. But we need everyone to join the race by contacting legislators, educating members about the cooperative difference, involving members in advocacy efforts—in short, uniting for the good of both credit unions and members.

SIDEBAR:
The Face of Advocacy

“Being a cooperative means we’re supposed to help our members wherever we can, not just from the financial services perspective,” says Dave Wilde, vice president of marketing for Sun Federal Credit Union, Maumee, Ohio. “We want to communicate to members that they’re truly part of something bigger—that this cooperative is more than just a financial institution.”

No need to wait

The most important time to act on retaining the credit union tax status is now—before the formal mechanisms in Congress start turning.

Both the Senate Finance Committee and the House Ways and Means Committee have gone out of their way to solicit input from the public and from members of Congress as they piece together reform legislation. As drafts are released, they will continue to solicit feedback—positive and negative—to help guide the bills that will ultimately become law.

As the committees and ultimately the two chambers consider the bills, however, making changes becomes more and more difficult.

Some in the credit union system say they will wait to engage until there is a vote on tax reform or on the credit union tax status. But this would be a lot like showing up for the last mile of the marathon. It would be a guaranteed loss because at that stage in the process it would be next to impossible to get out of or defeat the bill.

That’s why engaging in CUNA’s “Don’t Tax My Credit Union” campaign now is so important. In 2013, more than 1.3 million communications were sent to Congress urging legislators to retain the credit union tax status.

This is a good start, and it has helped protect the tax status in the early stages of reform talks. But we know this is just the tip of the iceberg in terms of our potential.

If everyone engages in this effort, the conversations credit unions have with congressional members in 2014—and the communications credit union members send to Congress—will propel us to victory when the gridlock subsides, Congress passes tax reform, and the president—whether it’s President Obama, President Christie, or President Clinton—signs it into law.

The battle to protect the credit union tax status isn’t just limited to Washington, however. Increasingly, it can also be seen in state capitals and even local communities. In 2013 alone, bankers and their lobbyists launched attacks on credit unions in Illinois, Oregon, and South Dakota.

Leagues and credit unions in those states—through smart membership engagement and advocacy tactics— have been successful so far in defeating these bank attacks. But similar state-level attacks are bound to continue in the months and years to come.

Again, the best antidote to these threats is credit unions’ willingness to engage their members.

Play to our strengths