Reviving the Spirit of St. Louis

St. Louis Community Credit Union stood at a crossroads in 2005. The credit union had abundant capital but faced stagnant growth. The board of directors and senior executives asked themselves: Do we want to be like many area financial institutions and do nothing as more people in our community fall through the cracks? Or do we become a force for change and empowerment?

“We were turning away hundreds of people who wanted access to basic accounts, but they couldn’t get them due to membership eligibility restrictions,” says Paul Woodruff, the credit union’s vice president of community development. “We also started to see an increase in members who were using payday lenders and check cashers, which strips wealth out of our community.

“If there’s no alternative to that, people will continue to use those services, which makes a bad situation even worse. And if members have loan obligations with us and payday lenders are taking their money, that’s a losing proposition for our credit union.”

The board and executive team decided to revise the credit union’s policies and procedures so it could better serve those members. And when new CEO Patrick Adams took over in 2008, he brought an even greater sense of urgency to St. Louis Community’s new direction. Operating with the philosophy that everyone deserves to be treated with financial dignity, the credit union: 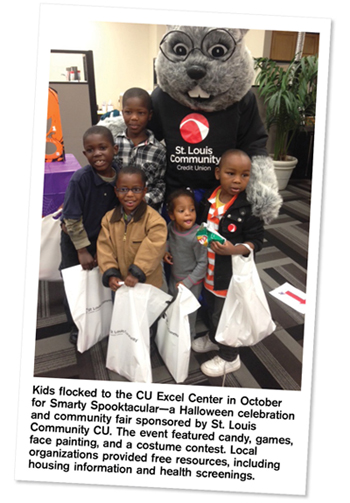 As these initiatives caught on, people started to realize they could get a second chance at the credit union when no one else would give them one. The credit union’s guiding philosophy is: “We don’t judge; we help,” says Woodruff.

“We could have gone to the suburbs and battled for deposits and become a ‘me too’ institution, but that’s not us,” says Adams.

What sets the $237 million asset St. Louis Community apart is “a cohesive understanding at the management level that its market is the low-income market—period,” says Pablo DeFilippi, the director of membership for the Federation.

“They know that’s their market, they own it, and they have excelled at developing a business model that makes sense—and makes money,” says DeFilippi. “It’s not just that they’re doing the right thing. They’re doing well by doing good.”

NEXT: A holistic approach