Bill Cheney welcomes more than 4,400 attendees to the GAC. 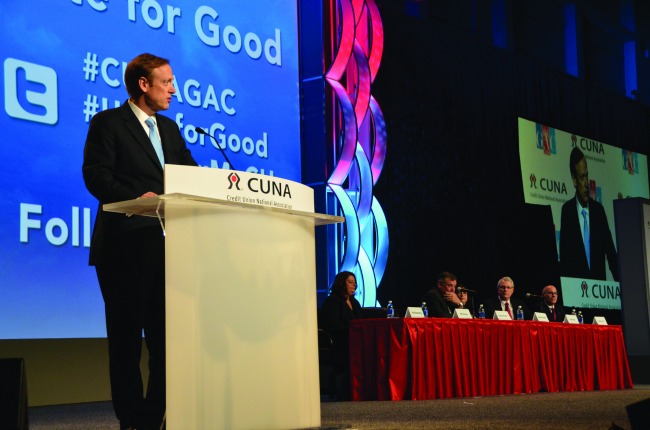 “Credit unions pretty much left the recession in the dust,” CUNA President/CEO Bill Cheney reported, as he kicked off Monday’s Opening General Session.

While he was especially excited to announce that the movement is on the cusp of 100 million memberships, he also noted there are some issues to tackle first: tax exemption, data breaches, risk-based capital, charter enhancement, and regulatory burdens.

The threat to tax exemption is still real, he warned, but efforts such as the award-winning “Don’t Tax My Credit Union” campaign are delivering results, generating more than 1.3 million contacts with lawmakers.

Target’s data breach prompted CUNA to be the first to call on Congress to hold hearings. Congress responded with four and possibly more sessions.

Similar efforts are underway with NCUA in response to the Agency's risk-based capital proposal. Among its recommendations, CUNA has called on the Agency to hold hearings to elicit input directly from credit unions.

According to Cheney, “This plan is simply not acceptable,” to which he received a rousing round of applause.

Along with these regulatory and legislative efforts, Cheney cited the grass roots power of credit unions as being most impressive, particularly with membership approaching the 100-million mark.

CUNA intends to capitalize on this strength, detailing a new Member Activation Plan designed to activate credit union members across the nation.

That effort—along with CUNA’s "Unite for Good” campaign—continues to fuel a strategic agenda describing why Americans choose credit unions as their best financial partner.

Cheney admits, “I’ve never been more optimistic about our future than I am today.” And he invited everyone in attendance to action, saying, “Let’s seize the opportunity!”