Member Benefits
Learn more
Learn more about the benefits of membership.
Home » Madeleine Albright on Managing a World of Change

Madeleine Albright on Managing a World of Change

The world has never been as interdependent as it is now, the former Secretary of State says. 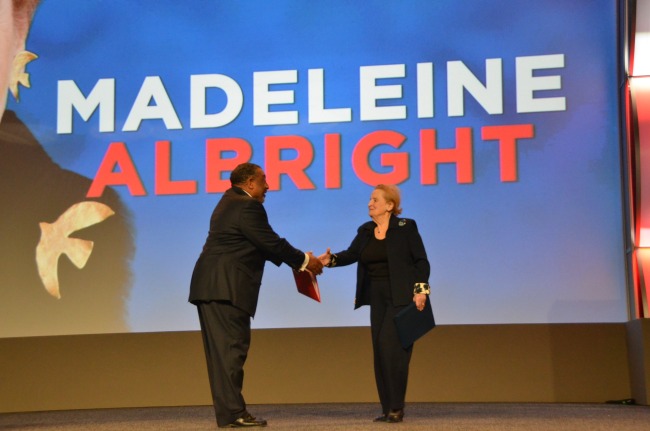 Former Secretary of State Madeleine Albright was managing a world of change long before she was giving speeches on the topic.

Albright, the 64th secretary of state—and first woman to hold that position—was born in Czechoslovakia, only a few months before Hitler’s troops marched into Prague.

"My father was a diplomat at the time and unwilling to cooperate with the Nazis, so my parents and I fled to England, where we spent World War II.”

When the war ended, they returned to Prague, where her father was designated a Czech ambassador. But when the government was taken over by Communists, her family again went into exile, this time across the Atlantic.

They moved to Colorado, where her father established a university program for international affairs.

The world is changing faster than ever, she said. “We used to compare international relations to chess, where two people are sitting quietly in chairs and conquering their moves. Now, I think it’s more like billiards—a game that’s dynamic and full of the unexpected.”

Megatrends in international systems intensify the pressures as we try to manage the world around us, she said. Policy makers have always dealt with megatrends, but these forces today create their own contradictions. For example:

• Globalization. The world has never been as interdependent as it is now. "This could be a force multiplier as we’ve seen during responses to natural disasters. But it also means trouble can spread far beyond its original source."

The situation in Ukraine, she explained, began over a trade relationship with the European Union, but has now grown into violent confrontations, and the forced resignation of the president. It’s dissolving into unpredictable consequences for how the U.S. and Europe relate to Russia.

• Information technology. Technology has transformed the way we live, work, and communicate, she said.

"But opening everyone’s eyes to one another has only exacerbated tensions. Now the poor can see what the rich had, and we can see in real time the growing chasm between the haves and the haven'ts"

These trends are straining the governance capacities of multinational institutions—such as the United Nations—and giving rise to nonstate actors, large companies, organizations, even credit unions, who are agents of change and influence.

On the proper role of the U.S. in international relations, Albright said, "the U.S. can’t lead alone nor can others lead without us."

And on credit unions, she said, you’re “like the Tom Hanks of the banking world. You’re likeable, you’re everywhere, and you weren’t misbehaving,” like the investment bankers depicted in the movie, “The Wolf of Wall Street.”

“To me, credit unions embody timeless values—the spirit of community, importance of volunteerism, and the need for integrity and high standards.”