CUs Endorse Tax Reform Proposal on 'Thank You Thursday' 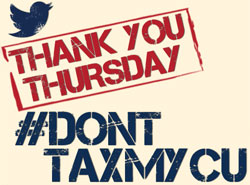 CUNA’s “Thank You Thursday” social media blitz exposed more than 250,000 Twitter users to the message that a tax on not-for-profit credit unions is a tax on their nearly 100 million members.

It’s not too late for advocates to express their support. Tweet legislators using this easy form, which automatically populates the handle for a House Ways and Means Committee member.

CUNA created "Don’t Tax My Credit Union" in 2013 in anticipation of a tax reform draft. More than one million contacts to the U.S. Congress have been generated under that program. Engagement spiked during a pair of “Don’t Tax Tuesdays” on July 23 and Sept. 10, and again on the eve of Rep. Camp's release of his tax reform discussion draft last month.