BECU shined brightest at the Diamond Awards competition, thanks to a TV advertisement that turned its members into stars.

BECU's SHARE advertisements—an entry in the Television (Single & Series) category—brings its brand to life through the voices of more than 50 members, whose stories are inspiring and moving.

The credit union's membership skyrocketed over the last two years due to outrage over large banks' excessive fees and the subsequent Occupy movement. The SHARE campaign expresses the sentiments of new and longtime members toward BECU, and features actual words and authentic social media interactions between employees and members.

This year’s Diamond Awards competition received over 1,130 entries. Judges awarded seven entries as Best of Show, along with 70 Category’s Best and 231 Diamond Awards.

“This year, categories and submission procedures were enhanced; combined with the matrix scoring system established in 2013, the caliber of entries showed impressive advancement," Hutchinson continued. "In the credit union industry, these awards hold us in high regard at our credit union and in the industry; all who won were very deserving of this recognition.”

Other 2014 Best of Show honorees include:

'Color' Award for Brilliant Use of Art

Entry: "Launch,” Diamond in the Rough.

Widget Financial wanted to inform the region of its name change through a 60-second animated TV commercial, with strong use of its new logo and brand elements. The credit union sought to attract young people and individuals who share their belief that a credit union is about more than just dollars. Widget Financial also wanted to increase its electronic audience, and create traction for its new website.

'Cut' Award for Most Edgy 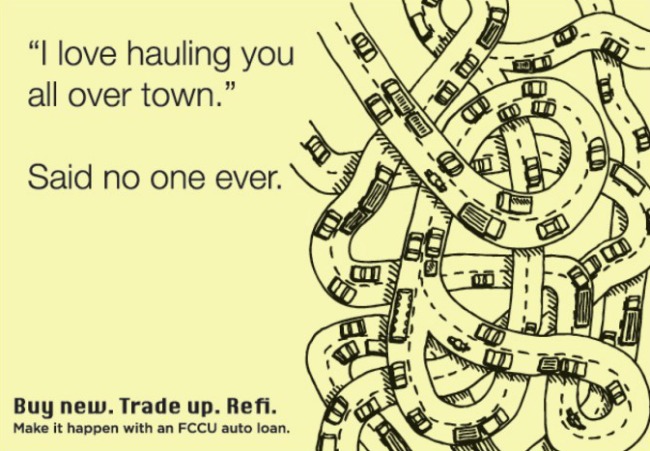 The objective of the postcard series was to keep Financial Center in the forefront of members’ minds for auto loans, especially members in the 20-30 and 31-45 age ranges. Utilizing internet meme-style messaging, “bleeped” language, holograms, and even a bicycle-riding Santa, the goal was to achieve a 4% response rate and gross $4.7 million in auto loans.

'Clarity' Award for Most Sentimental

The Gesa Wedding Commercial series promotes general awareness of the credit union and several product lines via television and a microsite. The campaign centered on a series of six TV commercials showing the lives of a fictional couple. The TV spots were shot as a storyline and broadcast one  at a time over seven months. Viewers anxiously awaited the next installment. The commercials directed viewers to a microsite, gesawedding.com, where they could learn about the characters, view the commercials, and join.

Directions sought primarily to spread the message not to text and drive to high school students, while increasing brand awareness of Directions and positioning the credit union as a partner with the local high schools. The CU partnered with two local TV stations to develop a "Don't Text & Drive" PSA campaign. Directions offered $1,000 to the high school that received the most pledges, for use toward the school's 2014 prom.

Best Use of Humor

Taleris utilized a cable TV advertising program to build brand awareness in Cuyahoga County and their new charter addition, Medina County. With a very limited budget, four spots were produced, accomplishing two branding goals: educating members on their great loan rates and using funny dogs to tell the story of how the credit union is different than a bank.

Best Use of Humor

“Making the CU a Great Place to Work” remains one of the credit union’s top strategic initiatives, so a holiday video was created to make executive team more relatable and personable to staff. The video shows the four members of the executive team sharing holiday cheer along with various credit union staff. The video was shared with employees, vendors and members via ORNL Federal's Facebook page. The video received over 6,300 views and has received great feedback from members and employees alike.